July 18 is a Global Action Day in support of Russian student Seva Ostapov!

No love is lost between the Russian population and the cops: facts of police terror are brought to light with disturbing frequency. 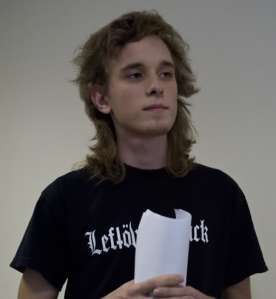 On April 4, 2008, Moscow cops beat up and arrested seven young men near Sokolniki metro station in Moscow. The reason for this was the attempt made by these kids to prevent the illegal arrest of their 19-year old friend Vsevolod “Seva” Ostapov. Once at the police station (Sokolniki Precinct), the “law enforcers” decided to show the “smartasses” the error of their ways: for several hours, the cops viciously beat up and tortured our friends with tasers (electroshockers). As they did this, the cops made lots of chauvinistic and racist remarks. (It is common knowledge that many Russian cops are very supportive of neo-Nazi ideas.)

Moscow anarchists reacted with a campaign that succeeded in attracting public and media attention. The top police brass was forced to publicly comment on the issue. The cops decided to go on the offensive. They charged six of the young people with a minor offense—participation in a public brawl—a brilliant move to cover up the the wounds the cops inflicted on their bodies. The seventh young person involved, Seva Ostapov, has been charged with a felony—assaulting a police officer. Seva faces a long prison sentence (Article 318.1 of the Russian Federation Criminal Code stipulates a maximum five-year sentence) if convicted, although the CCTV records and numerous witnesses indicate that the charge is completely fabricated.

Each and every part of the state machine of repression has acted in concert in this case. Medical personnel at various hospitals refused to examine and document the injuries the detainees had suffered while in police custody. (The Russian healthcare system is subservient to the state.) The prosecutor’s office ignores eyewitness testimonies submitted by Seva’s friends, while fake “accidental witnesses of the assault on the police officers” have started to appear out of nowhere; by some quirk of fate, they turn out to be cops as well. As events unfold, the criminal case opened against the police department for the illegal arrest and torture of Seva and his friends has stalled in spite of the huge amounts of evidence. The prosecutor “loses” different documents regarding the case or sometimes he just “forgets” to make the next logical step in the investigation.  This is typical for Russia as well.

It is obvious that the state takes this issue very seriously: either Seva goes to prison and the torturers in police uniform are thus absolved of all charges, or the state admits that the ranks of its police officers—“sworn to serve and protect”—include numerous torturers and fascists.

We ask you to support the Global Action Day of solidarity with Seva Ostapov on July 18. Carry out solidarity actions near the Russian embassy or consulate in your country (or any other Russian office if your town is lucky enough to have no Russian embassies in the vicinity)!

2 responses to “Solidarity with Seva Ostapov!”