Seva Ostapov: Convicted of the Crime of Being Beaten by the Police

We have posted on the ridiculous case of Vsevolod “Seva” Ostapov on two previous occasions. Yesterday, February 17, the whole ugly story came to a (we hope, temporary) conclusion in a Moscow court. Below, you’ll find translations of some of the coverage in the non-state-controlled press. We begin, however, with a short video by Grani-TV.Ru filmed outside and inside the Moscow courthouse where Seva was handed a one-year suspended sentence for the crime of being savagely beaten by the police. Seva himself, his lawyer, his parents, and his defenders share their impressions of the trial before and after the sentencing. The video also includes brief footage of the judge reading out the verdict. (In Russian)

The Preobrazhensky District Court in Moscow has sentenced Vsevolod Ostapov, a student at the Russian Peoples’ Friendship University (RUDN), to a one-year suspended sentence after finding him guilty of assaulting a police officer. Ostapov has announced that he will appeal the court’s decision, which “completely aped the version [of events advanced by police] investigators.”

On April 4, 2008, seven young men were severely beaten at the Sokolniki police precinct after they had been detained outside the Sokolniki metro station. Police used billy clubs and electric shockers while making the arrest, and the young men were likewise beaten at the police station. Among those beaten was RUDN student Vsevolod Ostapov. In August 2009 he was charged with assaulting a police officer. After the case was sent back to investigators four times for reinvestigation, it was sent to the Preobrazhensky District Court for trial.

The case against the police officers, which was reopened on June 28, 2008, was closed in the summer of 2009 for “lack of evidence.” Despite the testimony of medics, the young men who were beaten figured in the case only as witnesses, not as victims, and the police investigator was unable to establish the identities of the policemen who, allegedly, beat them.

Earlier, Alexander Bastyrkin, chair of the Investigative Committee of the Prosecutor’s Office cancelled the official refusal to open a criminal investigation into the beating of the young men by officers at the Sokolniki police precinct. He not only ordered that the investigation be reopened, but also that those guilty of “multiple unfounded processual decisions” be subjected to disciplinary actions.

Mobile phone footage of police detaining Vsevolod Ostapov and his friends on April 4, 2008, outside the Sokolniki metro station in Moscow

Journalists and civil rights activists have been following this widely publicized case. It all began on the evening of April 4, 2008, outside the Sokolniki metro station, when two beat cops approached 18-year-old Vsevolod Ostapov and attempted to arrest him for drinking beer. The young man felt that he had done nothing wrong and attempted to convince the policemen that he had not disturbed the peace. When his friends came to Ostapov’s defense, the policemen called in reinforcements. The young people were handcuffed, driven to the precinct, and beaten. They filed charges against the policemen, but in September of last year the criminal investigation was closed.

In an interview with Radio Svoboda, Ostapov again denied any wrongdoing on his own part.

“I think that this sentence is evidence of lawlessness on the part of the court. A court like this can only be called a kangaroo court: I was convicted of a crime I did not commit.”

Vsevolod Ostapov’s lawyer Yevgeny Chernousov has already announced that they will be appealing the sentence in the time prescribed by the law.

“We believe that today’s conviction of Vsevolod Ostapov, who has been sentenced by the court to a one-year suspended sentence and one year of probation, is illegal, baseless, and unjust. The court simply ignored the testimony of the defense witnesses: twenty or so people saw what happened on April 4, 2008, between the policemen and Vsevolod Ostapov outside the Sokolniki metro station. These witnesses confirmed that it was the police officers who initiated this conflict.”

According to specialists, the low level of the work of police investigators is evident. Sergei Zamoshkin, a lawyer and director of the Anti-Abuse Center, believes that the sentence and the crime with which Ostapov was charged lend support to the argument that he is innocent.

“Courts don’t give such light sentences for acts of violence against state officials. The relevant article of the [Criminal Code] stipulates a maximum five-year sentence. This gives us grounds to say that such an insignificant punishment is irrefutable proof of an absence of guilt on the part of the defendant. This is a quite traditional practice in our legal system when neither investigators nor the court find any evidence of guilt but don’t have the strength to admit this. But we need to understand that in and of itself our legal system allows the mistakes of investigators to be covered up in this way.”

“A dangerous precedent is set when even given such a large number of witnesses the court takes the side of two beat cops. What are the residents of Russia supposed to do in this situation? How are you supposed to go out on the street if a policeman can approach you and make unlawful demands, but there are no witnesses present?! This decision unties the hands of the police.”

Outraged by the unjust conviction of Vsevolod Ostapov, today, February 17, around seventy anarchists and other members of the Movement Against Police Lawlessness, carried out an unsanctioned protest action.

At around 7:10 p.m. the demonstrators began their march on Lubyanka Square, blocking traffic and chanting “Close Sokolniki Police Precinct”; “The People United Will Never Be Divided”; “Raise High the Black Flag, the State Is the Main Enemy”; “Say No to Police Lawlessness”, and other slogans. The demonstrators carried banners that read “No to Lawlessness,” “We Demand the Closure of Sokolniki Precinct,” and “Today It’s Seva, and Tomorrow?” They lit flares and tossed smoke grenades on the road in front of them.

Approximately ten minutes later the marchers descended into the metro and traveled to the site of the sad events of April 4, 2008. After exiting Sokolniki metro station, the marchers blocked Stromynka Street for several minutes. They added the chant “All Cops Are Yevsyukovs” to their cries. Soon, however, police cars began to surround them. Around fifteen people were taken into custody, including [three] journalists.

By 11:00 p.m. all the detainees had been released. All of them (except for the three journalists) were charged with a misdemeanor under Article 20.2 of the Administrative Code (violation of rules for picketing.) 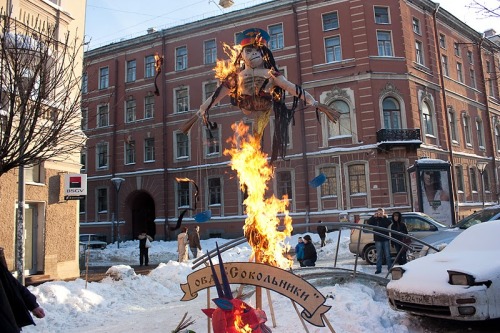 3 responses to “Seva Ostapov: Convicted of the Crime of Being Beaten by the Police”