Protests, Hunger Strike Over Artist’s Arrest Are Stepped Up

Human rights activists and opposition politicians have published an open letter in defense of Artyom Loskutov, the 23-year-old artist and activist arrested in Novosibirsk last month, while the hunger strike led by local artists at City Hall entered its 12th day on Monday. Loskutov, who has been in custody since his arrest on May 15, is due in court again on Wednesday, when it will be decided whether or not he will be released pending trial.

Meanwhile, Loskutov’s art group, Babushka Posle Pokhoron (Granny After the Funeral), declared Tuesday a day of solidarity for the imprisoned artist, whom they claim did not commit any crime and was arrested to punish him for “Monstrations,” colorful, non-political May Day processions in which he took part in Novosibirsk. The 11 grams of marijuana were planted on him by the police, Loskutov’s supporters say.

Various events in defense of Loskutov, from leafleting to demonstrations and concerts, will be held in several cities in Russia and abroad on Tuesday, his supporters say.

When visited on Monday, there were three artists on hunger strike and two supporters sitting in a public park in front of Smolny, the home of City Hall, next to the Soviet-era Karl Marx monument. The paintings that they have painted during the period were covered with plastic sheeting to stop them getting damp in the light rain, although they said they had painted a couple more when the sun briefly appeared during the past weekend.

According to Anastasia Nekoza, who has been on hunger strike since the protest began on May 28, six participants remain on strike, three of whom were at work or taking exams when visited on Monday afternoon, while another three had to withdraw for health reasons last week. Despite threats from a high-ranking police officer and OMON special-task policemen who visited the site late last week, no physical action has been taken by the authorities, Nekoza said.

Along with the immediate release of Loskutov, the artists are demanding the investigation and punishment of those responsible for May Day mass arrests, when an authorized 300-strong Pirate Street Party that they were organizing was thwarted by the OMON before it started. They also demand that a federal commission be launched to investigate the activities of the “E” (anti-extremism) Center, which they claim has turned into the political police and was behind Loskutov’s arrest.

On Friday, a group of human rights activists and opposition politicians including Lyudmila Alekseyeva, Lev Ponomaryov and Gleb Yakunin published a letter in defense of Loskutov, describing the case as an “act of intimidation against all contemporary Russian artists” and “another step toward the suppression of freedom of assembly and expression guaranteed by the constitution.”

The letter has since been signed by other prominent Russians, including the poet Lev Rubinshtein, the author Viktor Yerofeyev and the artists Alexander Brener, Andrei Monastyrsky and Vyacheslav Misin.

More photos by Sergey Chernov from day 12 of the hunger strike: 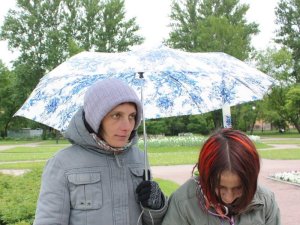 Anastasia Nekoza (on the left)

“Newlyweds are constantly being brought […], for some reason,

to the [Friedrich] Engels monument [opposite the camp of the hunger strikers].”