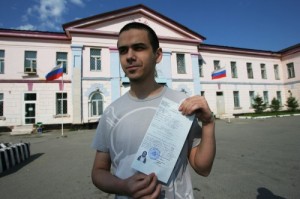 As the Institute for Collective Action reports, yesterday, June 10, the Novosibirsk Regional Court ordered Novosibirsk artist Artem Loskutov released on his own recognizance. A panel of judges ruled that there was no basis for the Dzerzhinsky District Court’s conclusion that Loskutov would continue to engage in criminal activity were he released pending trial. The lower court had also failed to take into account other mitigating circumstances—Loskutov’s lack of a criminal record, his student status, and the fact that his thesis defense had been scheduled for June.

Upon his release from a temporary detention facility, Artem headed straight to the Novosibirsk State Technical University for his thesis defense, where he was awarded a “B.” He talked about this, his time in custody, and his plans for the near future in an interview with Radio Svoboda:

—My major is cinematography, and my area of concentration is TV camera work. My diploma defense went off without a hitch. When I was released from the detention facility, I managed only to say hello to everyone before getting into a car and heading to my defense. My teachers were aware of my situation. They had already seen my work—that is, my thesis film. I submitted the documentation and got a “B.”

—They were fine: I got fed three times a day and they didn’t beat me once. I was constantly getting news from the outside. It really cheered me up.

—How do you respond to the drugs possession charges?

—The charges are fabricated. The drugs were planted. The inquest showed that I’m not an addict and that my fingerprints weren’t on the drugs. A swab of my hands showed no traces of drugs. Aside from the testimony of the arresting officers, there is no evidence.

—What are your plans for the immediate future? Will you be organizing actions on the order of the Monstrations?

—My problems with school were unexpectedly solved today: they passed my thesis. I have to find out what’s going on at work, whether they still want me there. As for public activism, it’s clear that this is dangerous for me while the investigation is ongoing. On the other hand, all my recent art actions were totally legal. All the actions were legal in fact! At the max, they violated the administrative code, but not the criminal code. I’m prepared to take responsibility for my art actions, but I’m not prepared to take responsibility for the drugs they planted on me.

I don’t know what my plans are. I want to see how this case ends. If it ends with my acquittal, that means these actions, civil society, still function in some form. If the case ends with my return to jail, then it will be obvious that these methods don’t work in our country. And that will mean that either that it’s time to move or that we have to change the law enforcement authorities.