“Who Would Ever Learn Philosophy to Make Money?”: Boycott Middlesex U Now!

Courtesy of Infinite Thought, here is a video, entitled “This is a movement now” and featuring a recent speech by Tariq Ali, about the protest campaign against the announced closure of the Middlesex University philosophy program. This is the first of seven parts. You can view the rest by clicking on the “View on YouTube” icon in the viewing window.

In the light of the Middlesex administration’s unresponsiveness to protests and its escalating thuggishness, a total boycott of the university has been called.

On April 26 Middlesex University announced the closure of its highly-ranked and well-respected philosophy program. This closure has no philosophical or pedagogical rationale, and in fact it has no economic justification either: far from losing money, after covering its salary and administrative costs the program contributes more than 50% of its revenue to the central management of the university. But the management unilaterally decided that it could make more money by investing its funds elsewhere. (For an overview of the situation see http://savemdxphil.com/about/).

Despite widespread international protest of the closure in the form of thousands of letters and petition signatures, the management has shown no signs of reconsidering its decision. Instead it seems dedicated to censoring all dissent: on May 21 it suspended three faculty members and several students for the ‘crime’ of campaigning to save their own courses and jobs.

It is time, then, for supporters of Middlesex Philosophy to take a more active stance.

We the undersigned therefore commit ourselves to an academic boycott of Middlesex University until it shows evidence of full reinstatement and continued support for its philosophy program.

Prior to such reinstatement, we will refuse to act as external examiners or to deliver talks at the school. We will encourage colleagues to reject job offers at Middlesex. We will refuse to visit campus for any reason other than to protest the decision to close the philosophy program. We will, in short, cease to engage with Middlesex as a legitimate academic institution.

In response to the Middlesex administration’s suspension of several teachers and students who participated in the recent occupation, the Save Middlesex Philosophy campaign has produced this helpful visual all-points bulletin to aid management in identifying and punishing the remaining miscreants. This fellow, for example, looks especially dangerous: 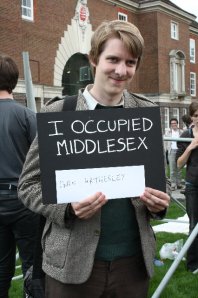