The Struggle for Democracy in Brazilian Universities

[This is a guest post by Comrade Rapha. He originally published the following comment yesterday on his own blog, Politika etc.]

Almost 25 years after the end of the military dictatorship (1964 – 1985), Brazil still faces the ghosts of authoritarianism. Surprisingly, these spirits came back in the context of an institution which played a remarkable role in the resistance to the military regime. In the past few days, professors, students and workers of the University of Sao Paulo witnessed a police action which made the community aware of the lack of democracy in its own academic environment.

On May 27th, workers blocked the entrance of four buildings in the State Capital campus. They asked for better wages and other labor demands. According to the rector, they were posting pickets during the strike to discourage other employees to work, an illegal act as stated by Brazilian laws. On June 1st, the administration called the police to intervene and stop the pickets. The police remained on campus and on June 9th, they attacked a group of students, professors and workers who were demonstrating against them.

The police used tear gas, pepper spray and rubber bullets to disperse the protesters. This action

generated lots of reactions. Several newspapers articles were published by those concerned, including faculty members, students and union members, showing anything but an opinion agreement on the police action. Part of the faculty supports the rector’s initiative to call the police and considered the intervention legitimate. On June 18th, more than 1,500 people demonstrated on the streets against the police reaction and its disproportion.

In 2007, students occupied the building where the rector’s office is located. They were against some decrees passed by Governor Jose Serra with the support of the rector Suely Vilela. The decrees considerably reduced the autonomy of the university in favor of the State Secretary of Education, concentrating more power in the hands of the Governor. After the occupation, Jose Serra stepped back and voided the decrees.

The University of Sao Paulo is responsible for 23% of all scientific production in Brazil. It has more than 86,000 students, 5,400 professors and 15,200 employees. The 2009 budget is about US$ 1.4 billion due to a disposition of the Sao Paulo State Constitution, which allocates 5% of all value added tax revenue of the State, which is the richest State in Brazil, to the university. It is clear that a major crisis in a university with these proportions reflects on local and national politics.

As the Philosophy professor of University of Campinas Marcos Nobre pointed out in a newspaper article, the police action is “the symptom, not the cause.” For him, this shows that despite having democratic institutions, “Brazilian society still has a low level of democratization.” The process to choose the university’s rector gives a good example of the way different groups are represented within the institution. Approximately 300 people vote to appoint 3 names to the State Governor, who is supposed to pick one. In this election, the group of “titular professors” (named chair professors) is majoritarian, and one must be a titular professor to become rector. Students and workers are not able to nominee someone to this position, even if both groups vote together.

By the moment, the rector and the union of workers started to negotiate again. The police are expected to leave the campus soon. The lesson which seems to have been learned till now is that the university needs to rethink its own structures. It has still to find the difficult tune for attending social demands of inclusion and participation.

Thanks to Comrade Rapha  for informing us about this story.

120 professors and about 1,200 students and university workers were beaten and teargassed in the main campus of the University of São Paulo in Brazil last Tuesday (June 9).

Conflicts started after a one month strike of university workers whose employment status is being disputed due to a legal controversy over university autonomy to hire its workers without approval of state representatives. Over one thousand workers might loose their jobs. Workers started a strike on May 5 demanding the preservation of their jobs and other labor demands. On May 27, workers started to block the entrance of four university buildings because, according to them, university management was threatening workers who were using their legal right to strike. On June 1, administration called the military police to intervene. On June 4 professors joined the strike protesting police occupation of campus. on June 5, professors had a two hours meeting with management asking for a non-military solution to the labor conflict. However, common sense did not prevail and military police attacked a peaceful demonstration of students and workers yesterday (June 9). 120 professors were discussing the crisis when the meeting was interrupted by news of a police attack. A few minutes later teargas and concussion bombs exploded inside the building. Several of our colleagues and students were hurt. The academic community is shocked.

We ask the support of the international scientific and academic community by demanding university management the immediate withdraw of military police from campus and the non-violent resolution of labor conflicts in the university.

Please send protest and concern letters to the University of São Paulo
administration:

The Worldwide War against Student Protest 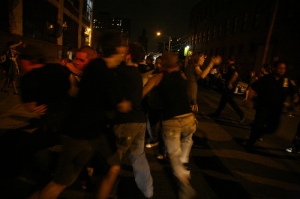 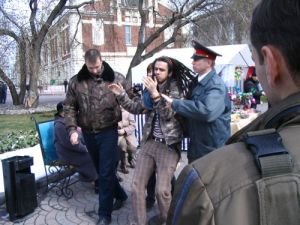