Putin to Protesters: You Deserve to Be Beaten

As reported by the Economist, whose reporter was on the scene at the high-powered coffee klatch known as the Valdai Discussion Club:

Mr Putin was dismissive of critics and opponents alike. He said that those who had been taking part in unauthorised street protests across the country deserved to be beaten and claimed that Russian police were no tougher than in other countries.

Meanwhile, this country, which is blessed by police who have the PM’s sanction to beat up anyone who exercises their constitutional right to assemble peaceably, is currently discussing a proposed law that would turn the militsia (as the Russian police are currently called, in keeping with “revolutionary” tradition) into the politsia. According to Andrey Makarov, a member of the PM’s own (naturally, ruling) party, United Russia, the law, if passed in its current redaction, would also turn the country into a “concentration camp”:

Moscow, 6 September: A member of the State Duma from (the ruling party) [United] Russia, Andrey Makarov, is calling against the adoption of the draft law on police in its current edition because, in his view, the current draft law would give the internal affairs structures unlimited rights.

“This law is in substance the abandoning of everything that we have fought for and won over recent years when we spoke of modernization… This is the complete omnipotence of the Interior Ministry. If we adopt this law, it will be scary to live in our country,” Makarov announced on Monday (6 September) at a round-table meeting dedicated to the discussion of this draft law.

The discussion is being held at the initiative of the State Duma Security Committee and its participants include representatives of law-enforcement bodies, senators, members of the Public Chamber and of a number of other agencies.

Makarov, who is one of the leaders of the liberal club of [United] Russia, stressed that in this case he expressed his personal view.

According to him, granting the bodies of internal affairs unlimited rights will lead to “the creation of a new concentration camp that will be called ‘Russia’, which will be run by a new criminal group called the ‘police’ – be it under its old or new name”.

The State Duma deputy suggested that this draft law is actively supported by the Interior Ministry because this structure is interested “in bonding the authorities with blood”.

“All our press today continues to be full of news from the battlefield – internal affairs bodies wage a war against their own people”, he said, noting that today these structures, “as is common practice in a combined criminal group, want to bond the authorities with blood, to tie them to the decisions that are taken”.

Makarov thinks “that the authorities still have the opportunity to reject it and say: ‘We are not with them, we are with the people’, however, after the law is adopted, this opportunity will be lost and people will start thinking of the authorities the way they today think of the Interior Ministry”.

With regard to all sorts of public councils set up under law-enforcement structures – the MP is convinced – the attempt to hide behind the names and reputations of honest people is “the most vile deception that has been suggested should be committed in our country”.

Makarov thinks that adopting the law on police in the edition that has been put forward would be a big mistake.

Makarov’s fears are echoed by Petersburg sociologist and criminology expert Yakov Gilinsky, writing on the blog of the Petersburg weekly Gorod 812:

[T]he rights of the militsia or the politsia […] will be significantly increased. In particular, [the right of the police] to enter the homes of citizens will nearly be unlimited. Why? On what basis? This is not to mention the fact that this clearly violates the Constitution, which directly states that  [a person’s] “domicile is inviolable” (Article 25). This is far from the only instance where the bill contradicts the country’s fundamental law. There are lots of such discrepancies [in the proposed bill]. On the whole, however, I can warn you that from now on (after the bill’s passage into law), the police will have much broader rights than now. And therefore all citizens – that is, you and me — will find themselves in a much tougher situation than we’re in now.

Finally, courtesy of LiveJournal blogger na6ludatelb, a visual tribute to the current Russian militsia and their mild mores in the blogger’s hometown of Petersburg. na6ludatelb included these visuals in his off-the-cuff rebuttal of the recent encomium to the city’s current satrap in the Independent (of which more later — that is, if we can stop vomiting). 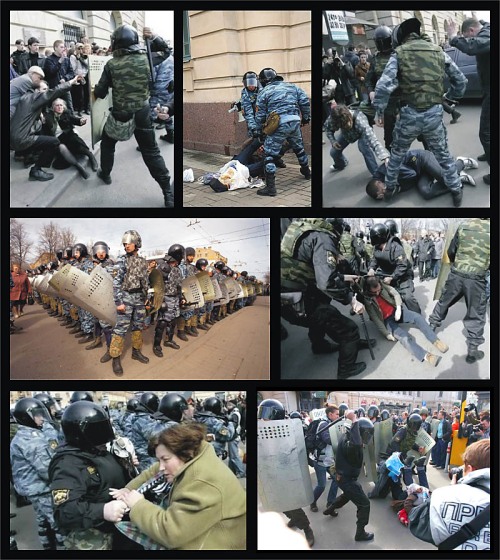