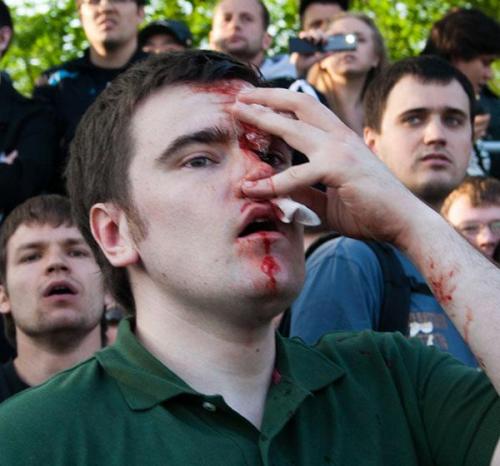 This is what our comrade Alexei Gaskarov looked like after riot cops got done with him on May 6, 2012, on Bolotnaya Square in Moscow. Yesterday, almost a year after the ominous events that took place there and the arrests, persecution and, in some cases, exile of several dozen opposition activists and ordinary citizens who were also there that day (and some who weren’t), Gaskarov was arrested while out buying food for his cat, transported to the Investigative Committee for questioning, charged with “rioting” and “violence against authorities,” and jailed. A Moscow district court will hear his case today and decide whether he will remain in police custody.

Thanks to an anonymous Facebook comrade for the photo.

MOSCOW — An independent investigation has blamed the Russian authorities and police for the violence that erupted at an opposition protest on Moscow’s Bolotnaya Square last year.

The investigative commission, composed of leading public figures and rights advocates, released its findings late on April 22 at a public event in Moscow.

The report blames riot police for “excessive use of force” against demonstrators on May 6, 2012, resulting in numerous injuries.

Authorities have only recognized injuries sustained by police officers.

More than 20 demonstrators have been charged with participating in “mass unrest” and assaulting police.

Fifteen remain in pretrial detention and four are under house arrest. All face prison if convicted.

Georgy Satarov, the head of the INDEM think tank in Moscow and a former aide to Russia’s first president, Boris Yeltsin, co-authored the report.

He told RFE/RL that the demonstrators’ reactions were understandable.

“They defended themselves and they defended others. Many of those who were not arrested and are now free would have done the same,” Satarov said.

It blames police for deliberately creating bottlenecks by blocking the protesters’ path, contributing to tensions.

It also accuses the authorities of sending a “significant number of provocateurs” into the crowd to spark clashes — a claim backed by witnesses as well as the Kremlin’s human rights council.

Satarov said the pieces of asphalt that some the defendants are accused of throwing at police had been placed on the square ahead of the rally.

“Bolotnaya Square was cordoned off overnight, it was surrounded by a tight fence inside which the asphalt was cut into pieces,” Satarov said.

“This circumstance was fully used by provocateurs. There are a multitude of other signs that indicate a planned provocation by authorities.”

One of the defendants in the so-called Bolotnaya case, Maksim Luzyanin, has already been sentenced to 4 1/2 years in prison after pleading guilty and cooperating with investigators.

Authorities say their probe into the other defendants is nearing completion.

Investigators are still tracking down some 70 other protesters they suspect of disruptive behavior at the rally.

The investigative commission plans to send its report to the Organization for Security and Cooperation in Europe, the European Parliament, and the United Nations.

It was formed by the opposition party RPR-PARNAS, the December 12 Roundtable civil group, and the May 6 Committee. It includes top rights activists like Lyudmila Alekseyeva and a number of prominent public figures such as economist and former Economy Minister Yevgeny Yasin.

Rezistenţa Populară: On the Events in Moldova

A Communiqué from the Rezistenţa Populară Political Movement on the Situation in Moldova after the Parliamentary Elections of April 5, 2009

According to the official results of the parliamentary elections that took place on April 5, 2009, the ruling party in Moldova, the pseudo-communist PСRM (Party of Communists of the Republic of Moldova), received 49.9% of the vote. This enables them to seat 61 deputies in parliament, and their votes are sufficient to elect the republic’s new president (who requires a three-fifths majority of deputies to take office). Despite the fact that international observers have declared the elections fair, numerous violations were noted on election day. Voters were surprised to find on the voting rolls the names of their dead relatives, as well as the names of unknown people who had been mysteriously registered as living in their apartments. There were also cases when election commissions refused to give people ballots—because someone had already signed and voted for them. 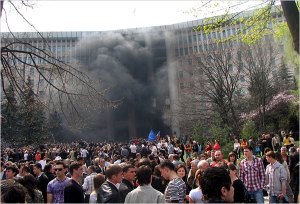 The opposition parties publicly disputed the falsified election results. On Monday evening they held a peaceful protest rally on the square next to Government House that brought out approximately five thousand people. On April 7, from twenty to thirty thousand people gathered in the center of the capital; these were mainly university and high school students, who came in response to appeals from the opposition parties. Their principal demand was that the results of the election, which they believed had been falsified, be overturned, and new elections be held. Opposition leaders very quickly lost control of the crowd. The authorities, who had not anticipated such massive protests, had posted insufficient numbers of policemen to guard the buildings of the parliament and the presidential administration; they were simply swept away by the enraged crowd. The police—who in 2008 “heroically” dispersed protests by pensioners unhappy with their miserly pensions (lower than the minimum living standard)—proved powerless against the young people. Despite attempts by representatives of the opposition parties to prevent acts of vandalism, their appeals were simply ignored. The rioters smashed all the windows on the first two floors of Parliament and the Presidential Palace. Both these buildings were looted; furniture and documents were torched. Two stories of the Parliament were completely gutted by fire, and two police vans were burned. The damage amounts to millions of lei. The main propaganda force in these protests were members of the nationalist parties. It was they who chanted “Down with the communists!” and raised the flags of Romania and the EU over the Parliament.

In his address to the nation, President Voronin characterized these events as a coup, and he laid all the blame for the events on the leaders of the Liberal Party, the Liberal Democratic Party, and Our Moldova Alliance. That same day, PСRM representative Marian Lupu met with the leaders of these parties. In a neutral albeit admonitory tone, he asked them to cease all protests and engage in dialogue within the bounds prescribed by law. The opposition leaders repeated their demands for new elections, and they blamed the authorities and the police for what had happened. According to the opposition leaders, it was their actions that had provoked the riots. 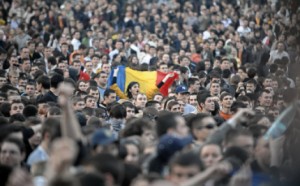 In light of the current situation, Rezistenţa Populară makes the following statement. We fully recognize the fact that the ruling party falsified the election results. It is losing support amongst the masses, and it has attempted to compensate for this lack of support through falsification in order to remain in power. (For the bourgeois grouping who backs the party, this is quite important.) However, the PСRM’s influence is still quite great, and a significant number of voters did in fact vote for this party insofar as the other parties represent the interests of even more odious bourgeois groupings. Unfortunately, seduced by the PСRM’s promises to preserve an illusory “stability,” voters from the masses of workers and the poor did not use their chance to vote for the working-class candidate from Rezistenţa Populară. The central plank of our platform was organization of the workers’ struggle for their rights.

The events in Chişinău are a reflection of the struggle amongst the main groupings of the bourgeoisie over the redistribution of property and state power. The PСRM is supported by the state bureaucracy, which is wavering in this situation (the party has had no principled activists in its ranks for a long time). The opposition is supported by young people (mainly Moldovan speakers) unhappy with the system. The campaign platforms of these parties are indistinguishable. Both the PСRM and the opposition support rapidly integrating with the EU and continuing the liberalization of the economy. However, a defeat for the PСRM would destroy the party, which over the course of the past eight years has discredited the idea of communism. The young people who chant “Down with the communists” quite sincerely believe that communism equals the Voronin regime. His clan owns the factories, banks, transportation, IT, and telecommunications companies, and it is under his regime that a police state has been established in Moldova. President Voronin is Moldova’s chief “communist,” but his son is one of the republic’s biggest capitalists, a billionaire. And yet our country is the poorest state in Europe. 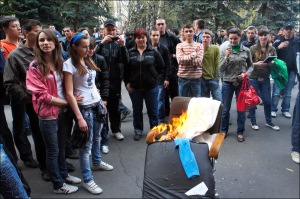 Rezistenţa Populară condemns the acts of vandalism, which have caused enormous damage to public property. However, we believe that blame for this is shared both the leaders of the opposition, who failed to keep the protests peaceful, and the authorities, who were unable to provide the necessary security for the parliament and presidential administration buildings. It is likely the case that, not entirely sure whether police units were loyal to him, Voronin was simply afraid to give orders to take more decisive action, just as was the case twenty years ago, when he was the interior minister of the Moldovan Soviet Socialist Republic.

We believe that the protests also have a definite social subtext. Most young people feel abandoned and unwanted by society in the new period of “stability” that has been established by the regime. During an “interview” with journalists from PRO-TV in the looted parliament building, one of the young marauders said, “I’m twenty now. What will I have in this country by the time I’m thirty? Nothing!” In essence, the universities are diploma mills for gastarbeiters, who will replace their parents on construction sites in Moscow and Italy.

In the current situation, Rezistenţa Populară’s main task is to provide a class-based explanation for what is happening. We argue that there is no principal difference between the PСRM and the opposition; that we need to fight not for one bourgeois against another, but in order to get rid of them all. It is capitalism that is to blame for everything: it throws people into the trash heap; it deprives them of work and the means of existence or turns them into beasts of burden. The only solution is for workers to unite in the struggle for their class interests—for a decent wage, pension or stipend; for an end to the privatization of public property; for the nationalization of the principal means of production and the banking system. In the end, for socialism!

Originally published (in Russian) on the website of the Vpered Socialist Movement.