During the last year, following the murder of Juliano Mer Khamis, the Israeli army has attacked The Freedom Theatre, its employees and their families on six separate occasions. The last attack took place only a few days ago when the Artistic Director of The Freedom Theatre, Nabil Al-Raee, was taken from his home in the middle of the night.

The Palestinian Authority has increasingly been cracking down on all forms of dissent or criticism against them. This has also affected the theatre severely. We have had enough and we ask you to help us put an end to the harassment directed at The Freedom Theatre, a cultural venue dedicated to the children, youth and adults of Jenin Refugee Camp and beyond.

Zakaria Zubeidi held in unlawful detention by the Palestinian Authority
Zakaria Zubeidi, co-founder and avid supporter of The Freedom Theatre, was arrested by Palestinian security forces on the 13th of May and taken to Jericho prison. Since then Zakaria has not been allowed to meet his lawyer Farid Hawash or have any contact with his family. Yesterday his detention was extended, without any given reason, with another 15 days.

According to his lawyer, Zakaria’s arrest has not followed due process since he should have been brought before a Jenin court and not taken away to Jericho. His right to communicate with his family after a maximum of 10 days has also been violated, as has his right to consult with a lawyer. After having travelled to Jericho Mr. Hawash was only able to see Zakaria for a minute to say hello.

“I am unable to determine if Zakaria has been treated correctly since I haven’t been able to talk with him,” says Mr. Hawash. “We have to apply the correct procedure of Palestinian law; as his lawyer I must be allowed to meet with my client.”

We ask you to contact the following representatives of the Palestinian Authority to demand that they abide by Palestinian law in the case of Zakaria Zubeidi and other detainees. Please also check if you have a PLO representative office in your country.

Nabil is presently being held in the Jalameh detention centre in Israel. Nabil’s lawyer, Smadar Ben-Natan, was today informed that his detention has been extended for another 7 days. Nabil has not been allowed to meet or talk with his lawyer, or to communicate with his family. The interrogations at Jalameh and other military detention centres commonly involve inhumane treatment such as sleep deprivation, psychological pressure and binding in painful positions.

The Freedom Theatre has on numerous occasions expressed its full cooperation in the investigation of the murder of the theatre’s co-founder and former General Director Juliano Mer Khamis. Its members have proved this willingness to cooperate by meeting every requested appointment and answering all questions to the best of their knowledge, no matter how intimidating and insulting the interrogation methods.

This last abduction of Nabil Al-Raee has led us to the conviction that the regular and systematized harassment of the employees of The Freedom Theatre has nothing to do with the investigation of Juliano’s murder. It is clearly a campaign directed at the Freedom Theatre itself.

We urge all supporters of The Freedom Theatre specifically and protectors of art and culture in general to call and e-mail their nearest Israeli representative office to demand the immediate release of Nabil Al-Raee (ID-number 906349162) and an end to the systematic harassment of the members of The Freedom Theatre. In addition, please call the District Coordination Office of the Israeli army at +972-(0)4-640-73-12.

For more information, or to share any reactions to your calls, e-mails and other efforts, please contact The Freedom Theatre at info@thefreedomtheatre.org

Mahmoud Sarsak, 25, is a Palestinian national team player. He has been imprisoned by the Israeli government for three years without any trial. In desparation, and to protest against his condition and lack of civil liberties, Sarsak is on a hunger strike. The 25-year old footballer has not eaten for 85 days and has lost approximately thirty kilos in weight. According to human rights organisation Addameer the situation of Mahmoud is critical.

On 22 July 2009 Sarsak – who lives in Rafah in the Gaza Strip – was arrested at a checkpoint when he was on his way to the West Bank for a match with his national team. He was interrogated for thirty days and then imprisoned without any trial or a precise legal charge. Family and friends are not allowed to visit him. They do not know why he is being detained for already nearly three years – no charge, no trial.

According to the Israeli government he is an illegal combatant and therefore they can imprison him indefinitely. Israeli jails house around 4,000 Palestinian political prisoners, more than 300 of them “administrative detainees” held without charge or trial. Sarsak, and all victims of abuse by the Israeli state, need our support.

This urgent campaign to release Mahmoud Sarsak is being supported by:

Fight for the Life of Mahmoud Sarsak! (London)

Fight for the Life of Mahmoud Sarsak! 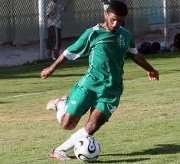 As the world watches millionaire footballers compete for the European Championship trophy, Palestinian footballer Mahmoud Sarsak is close to death as he enters his 85th day of hunger strike, the longest in history.

Sarsak, a 25-year-old footballer and student from Gaza, was arrested three years ago as he was trying to meet up with the national team in the West Bank, and has been detained indefinitely without charge or trial ever since.

Come and protest against this blatant abuse of human rights on Monday 11th June at 3pm outside the Department of Media, Culture and Sport in a coordinated action with the We Are All Hana Shalabi Network from Scotland who will be protesting outside the British Consulate in Jerusalem.

Bring footballs, football shirts and banners for a fun media-friendly kickabout outside the DMCS to raise awareness of Sarsak and the thousands of Palestinian prisoners being held under administrative detention and illegal combatant laws.

Clearly it was too effective in gaining rapid growing support, so presumably the Zionist trolls made false allegations and Facebook just blocked it without any notification or investigation. Please follow details and updates also through emails, twitter and phones.

Tottenham is ablaze.  Not for the first time in its history.  Not for the first time over police violence and killing either.  But nor is this is the first major riot since the Tories took office.  It may well be the first to make a serious impact on national politics, but remember the riots in Bristol and Lewisham.  The party of order expected this.  That is why the police handling of protests has been so provocative and brutal.  That is why ‘exemplary’ sentences have been handed out for minor protest offenses, with even Murdoch’s pie-man being given a custodial sentence.  The intention has been to show that the party of order can keep control throughout the coming battles.  I hope, with every fibre in my being, that they cannot.

Because in Israel the colonial dynamic still predominates, and because the vast majority of Israeli workers have not begun to break with Zionism, and indeed many could reasonably claim to get some benefit from it, how these social antagonisms and elite fissures work out depends primarily on the regional context.  If the Arab Spring continues and radicalises, the weakening of Israel’s position, its usefulness to Washington, and its ability to sustain military policies that sections of its ruling class already find burdensome, then the prospects of major social struggles in Israel are increased.  If not, then I suspect the Israeli ruling class can resolve its difficulties at the expense of the Palestinians and take a further lurch down the road to some sort of fascism.

Moreover, the impending United Nations vote on Palestinian statehood in September imposes a deadline of sorts on the protesters. If Palestinians react by marching on Israeli army checkpoints to demand freedom, Israeli protesters will have to choose between losing internal support by siding with the Palestinians, or abandoning any claim of a pro-democracy agenda by siding with the Israeli soldiers charged with suppressing them. Before September comes, the protesters must first secure some more earthly achievements, like rent control in Israel’s larger cities, or perhaps, as the placards demand, even bring down Mr. Netanyahu’s coalition government. Only then could a sense of victory and democratic empowerment propel Israelis toward challenging the occupation, which remains the single greatest obstacle to social and political justice on either side of the Green Line.