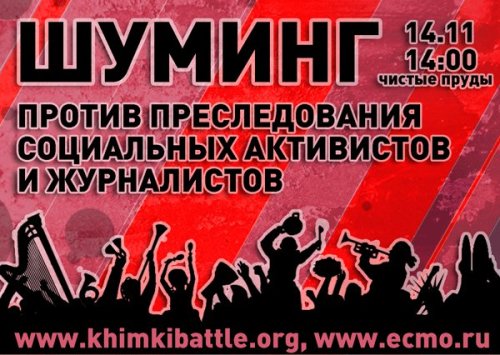 Two years ago a wave of terror against social activists and journalists rolled over Russia. Newspaper editor and activist Mikhail Beketov was severely beaten in Khimki. In Moscow, persons unknown attacked sociologist and activist Carine Clément. In Vsevolozhsk (Leningrad Region), independent trade union leader Alexei Etmanov was also attacked by unknown assailants on multiple occasions. In Yakutia, trade union activist Valentin Urusov was framed by local police on a drugs charge, tried, and sentenced to several years in prison. In response to this terror, social activists held a demonstration at Chistye Prudy in Moscow that was attended by a few hundred people.

Two years have passed. Police have still not identified and arrested the people who assaulted Beketov, Clément, and Etmanov. Valentin Urusov is still serving time in prison for a crime he did not commit.

Today we are witnessing a repeat of the events of two years ago. Environmentalist Konstantin Fetisov has been severely beaten in Khimki. Unknown assailants have attacked and severely beaten journalist Oleg Kashin. The authorities are trying to frame antifascist activists for crimes they did not commit. In Zhukovsky, thugs beat up journalist Anatoly Adamchuk.

We believe that these new tragedies are the result of apathy in our society, which two years ago was unable to force authorities to find and punish the guilty parties in those dark events. The time has come to put an end to this, for if this time the criminals are not found, the atmosphere of impunity will untie the hands of all other scumbags once and for all. Instead of being shocking exceptions, these acts of terror will become a matter of everyday practice.

At 2:00 p.m. on November 14 we ask you to come join us at Chistye Prudy in Moscow. We realize that there is no point in long speeches. It is unlikely that anyone can learn something new, something that has not been published in the Internet. And so we suggest that you bring with you anything that can make a lot of noise as a symbol of your rage and indignation.

Silence and calm is exactly the reaction aimed for by those who jail, cripple, and murder people who disagree with the existing order.