There were 95 miners arrested at Orgreave and prosecuted for riot, a charge that carried the potential for a long prison sentence up to a maximum of life. But a year later, on 17 July 1985, all 95 were acquitted. The prosecution withdrew, from the first trial of 15, after police gave unconvincing accounts in the witness box: it became clear that the miners had themselves been attacked by police on horses or with truncheons, and there was evidence that a police officer’s signature on a statement had been forged. 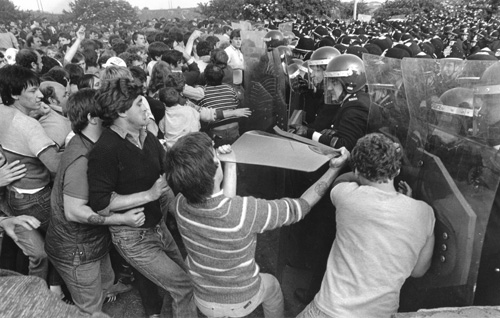 According to a report by the newspaper Izvestiya, which cited a statement issued by the working group of the Presidential Human Rights Council: the events of May 6, 2012 on Bolotnaya Square in Moscow were provoked by the police and cannot legally be deemed to be riots. By the evening of Thursday, January 31, the statement had been signed by about half of the Council’s members.

According to Izvestiya’s information, the statement had been signed by the journalists Leonid Parfenov and Ivan Zasursky, civil society activist Irina Khakamada, and head of the Russian Aid Foundation (Rusfond) Lev Ambinder. Having completed an investigation into the circumstances of the incidents at Bolotnaya, the human rights activists decided that the opposition protesters had been compelled to act the way they did. The statement calls for all the accused in the “Bolotnaya Case” to be released from custody.

“Neither before nor since 6 May, have the police created such unbearable and provocative conditions for demonstrators,” the working group declared in their statement. Notably, the statement specifically drew on evidence provided by members of the Human Rights Council, who had been present at Bolotnaya as public observers. They stressed that the disorder arose as a result of the pressure caused by the huge police cordons, Lenta.ru noted.

In May, at Bolotnaya Square the “March of Millions” escalated into clashes between protesters and the police. At present, twelve people involved in a criminal case pertaining to the alleged riots are awaiting sentence in custody. Investigators want to send one of the alleged rioters for compulsory psychological treatment and another five are under house arrest. The only sentence in the case – 4.5 years in prison – was handed down in November against Maksim Luzyanin, who confessed to attacking the police.

Previously, in May 2012, Federal Human Rights Ombudsman Vladimir Lukin had declared that there had not been any rioting at Bolotnaya Square, but merely isolated clashes between demonstrators and police. In November, the head of the Moscow Helsinki Group proposed that a public inquiry be held based on Lukin’s findings. But on January 30, 2013, it emerged that an independent group consisting of people opposed to the government had already interviewed around two hundred witnesses to the disturbances and presented this information to independent experts.

Now check out the surprise ending:

With an eye on further improving ties with Britain, President Vladimir Putin has signed a decree designating 2014 as the year of British culture in Russia.

The decree, which is aimed at fostering closer relations between the two countries, also calls for a celebration of Russian culture in Britain next year, the Kremlin said in a statement Tuesday.

The head of the organizing committee on the Russian side will be Deputy Prime Minister Olga Golodets, Interfax reported. Committee members will include Culture Minister Vladimir Medinsky, Kremlin cultural aide Mikhail Shvydkoi, and the heads of the Bolshoi and Mariinsky theaters and the Pushkin and Hermitage museums.

Relations between Russia and Britain have shown a revival in recent months after falling to a low point after Moscow’s refusal to extradite State Duma Deputy Andrei Lugavoi in connection to the 2006 poisoning death of Kremlin critic Alexander Litvinenko in London.

The Russian Foreign Ministry announced in mid-March that Russia and Britain had agreed to set aside 2014 as a year to celebration of the other country’s culture.

Photos courtesy of John Sturrock/Socialist Worker and politzeki.tumbler.com. Thanks to the invaluable Comrade Agata for the heads-up. Read her timely 2010 interview with artist Jeremy Deller, who re-enacted the Battle of Orgreave in 2001, here.

Which Side Are You On?

Stunning documentary on the 1984 UK Miners Strike where international capital used Margaret Thatcher’s Tory government to mount a vicious campaign of violence and hatred on the British working class. The film features the miners and their families experiences told through songs, poems and other art.

How to remember Margaret Thatcher? Shall we recall the friend of Augusto Pinochet, the woman who protested bitterly about the arrest of Chile’s murderous dictator, a man to whom, she said, Britain owed so much? What about the staunch ally of apartheid, the prime minister who labelled the ANC ‘terrorists’ and did everything possible to undermine international action against the racist regime? The anti-union zealot who described striking miners defending their livelihood as an ‘enemy within’, hostile to liberty? The militarist who prosecuted the Falklands war, as vicious as it was pointless? The Cold Warrior, who stood by Reagan’s side, while the US conducted its genocidal counterinsurgencies in Latin America? The British chauvinist who allowed Bobby Sands to slowly starve to death?

Many people on the left are aware of the defeat of the miners’ union in 1985, but few know of the major industrial and political battles that precipitated the defeat.

In 1980, the steel strike was the first national strike against the Tories. The steelworkers went for a 17% pay increase (the inflation rate was 20%) and fought to protect jobs. British Steel offered 2%, and proposed plant closures and 52,000 redundancies.

The steelworkers fought hard. Huge pickets were mounted at some sites, like Hadfield’s in Sheffield, and flying pickets were organised against private sector steel users.

After a 13-week battle, the workers won a 19% wage increase (including 5% for productivity trade-offs), but thousands of jobs were lost. It was a victory for the government. The main reason for the partial defeat was the isolation of the steelworkers.

Following this, the Tories moved to beef up anti-union laws by outlawing solidarity strikes and picketing. The TUC’s response has to call a national day of action, in which 250,000 people marched in 130 cities. But there was no follow-up action and the anti-union legislation was passed.

By October 1981, the Tories were on the nose. The Social Democratic Party-Liberal Alliance was scoring 59% in opinion polls. The Tories announced new anti-worker legislation, which included outlawing unions from engaging in political action, allowing employers to sack and selectively redeploy workers, and sequestrating unions’ assets if they broke industrial laws.

The union tops failed to call for strike action. Instead, they adopted a position of “non-cooperation” with the act. If a union was attacked, the TUC promised to support it.

In the meantime, an earth-shaking event occurred — Britain went to war with Argentina. This was the perfect diversion for the unpopular government. A short, sharp war — oozing with nationalism — which Britain could not lose.

In the first major test of the Tory’s legislation, railway workers launched an all-out strike to stop trade-offs in working conditions. The strike was solid and picket lines were respected.

The TUC called a general council meeting, ordered the workers back to work and warned that if the strikers did not obey, the rail union would be suspended from the TUC. The union was forced to accept defeat and go back to work.

The TUC “non-cooperation” with the act turned into a cynical betrayal. The rationale was that the strike must end to get Labour re-elected.

Thatcher was re-elected in a landslide in 1983 and worse was to come for the union movement. The next major industrial stoush was in the printing industry, between the National Graphical Association and Eddie Shah, the owner of the Stockport Messenger.

Shah won an injunction to have the union remove a picket line but the union refused. The union was fined £150,000 for contempt of court. The picket line at Warrington was attacked by 3000 riot police. The cops broke the line, chased people into neighbouring fields and beat them up.

A further fine of £375,000 was imposed and the union’s assets were sequestrated. The union called a 24-hour strike and went to the TUC for support, citing its pledge to defend any union under attack.

The TUC decided not to support the printers — a move warmly welcomed by Thatcher. Thornett’s describes the TUC’s decision as a “total collapse in front of the anti-union laws without a shot being fired — a defining moment in the history of the British trade union movement.”

Thatcher now knew that she could pick off each union one by one. The coalminers were next in line, followed by Murdoch’s attack on the newspaper printers.

Arkady Kots, “S kem ty zaodno?” (Which Side Are You On?). Video by STAB Critical Animation Workshop (Joshik Murzakhmetov & Samat Mambetshayev). The song can also be played and downloaded here.

Thanks to various Facebook and listserv comrades for all the heads-up.