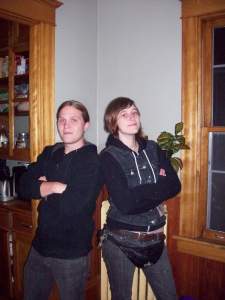 Carrie Feldman and Scott DeMuth are activists from Minneapolis, MN, who were subpoenaed to a federal grand jury in Iowa investigating animal rights vandalism from 2004. They both refused to cooperate with the grand jury, and were put in jail. Carrie is still being held on civil contempt of court. On 11/19/09, Scott’s civil contempt charge was dropped and he was indicted for conspiracy under the Animal Enterprise Terrorism Act. Scott was released on 11/30 pending trial.

Carrie Feldman is 20 years old, and has worked with a variety of projects in the Twin Cities, including Coldsnap Legal Collective, EWOK!, and the Jack Pine Community Center. Carrie is a former student of the College of St. Catherine. Before she went to jail on 11/17/09, Carrie was taking a year off from school and spent her time traveling, doing personal care assistant work for her grandma, and working on activist projects.

Scott DeMuth is 22, and has been involved in several projects in the Twin Cities including the Anarchist Black Cross and the Jack Pine Community Center. He is currently a member of EWOK! (Earth Warriors are OK!), Oyate Nipi Kte, and the editorial collective for the Dakota community journal Anpao Duta. He is also a Dakota language student and a graduate student in the Sociology Department at the University of Minnesota.

For information about writing Carrie in jail or how you can support them, see our “What You Can Do” page.

Davenport, IA — On Friday, January 22nd, an appellate panel in Davenport, Iowa denied an appeal for the release of imprisoned grand jury resister Carrie Feldman. The decision means that Feldman may remain in custody through the remainder of the grand jury’s service, another nine months. Feldman was jailed on November 17th of last year for civil contempt after refusing to testify before the grand jury as a matter of principle. Judge John Jarvey had denied the original motion for her release on December 8th in federal district court.

The appellate ruling was marked by highly suspect processes. The judges allowed prosecutor Cliff Cronk to file secret evidence to substantiate the claim that Feldman’s testimony is still relevant to the investigation of the Animal Liberation Front (ALF) action at the University of Iowa in 2004, in which research equipment was damaged and hundreds of animals were set free. Feldman’s lawyers are not permitted to view this evidence. Additionally, the judges asked Cronk to file a rare second reply to Feldman’s appeal.

“The lack of transparency in the appeal process is another demonstration of the federal government’s commitment to punishing people for their political beliefs and principles,” said Thomas Addo of Earth Warriors are OK! “Using secret evidence to justify Carrie’s unwarranted incarceration is a blatant violation of due process and justice.”

The appellate decision comes on the heels of a court appearance by Leana Stormont, who was recently subpoenaed to appear before the grand jury in Davenport. Stormont was a law student and outspoken animal rights activist at the University of Iowa in 2004. After the ALF action at the university, she experienced overt intimidation and harassment by the Federal Bureau of Investigation. Stormont’s attorneys are fighting the subpoena. Stormont, currently of Virginia, was the third person subpoenaed to the Davenport grand jury, following Feldman and Scott DeMuth, both of Minneapolis. DeMuth was indicted November 18th for conspiracy to “commit animal enterprise terrorism and cause economic damage to the animal enterprise in an amount exceeding $10,000” under the Animal Enterprise Terrorism Act (AETA).

On Tuesday, November 17, 2009, Carrie Feldman and Scott DeMuth of Minneapolis were called before a federal grand jury in Davenport, Iowa. They were subpoenaed in the most recent use of Green Scare tactics in Minnesota, the government’s desperate attempt to obtain information about activists, grasp at straws to file charges against them, and disrupt radical animal-rights and environmental movements such as the Animal Liberation Front and Earth Liberation Front. Rightfully so, Carrie and Scott refused to cooperate and testify.

At the request of Prosecutor Cliff Cronk, District Judge John Jarvey found them in contempt of court and had them taken into custody immediately. Scott was charged with conspiracy under the Animal Enterprise Terrorism Act two days later, becoming the seventh person charged under this dangerous law passed through shady procedures in 2006. Once he was facing a criminal charge, his charge of civil contempt was dropped and he became eligible for release. Cronk tried to keep him locked up by arguing that his political beliefs and associations make him a “domestic terrorist,” but his ridiculous arguments failed and Scott was released after about two weeks.

Carrie’s situation has been drastically different. She remains locked up in Iowa as the government punishes her for her political beliefs and resistance to the grand jury process. She could be held for the duration of the grand jury–another 10 months. Grand juries have historically been used to repress dissent and disrupt social movements by intimidating people into abandoning their activism, unjustly incarcerating them and separating them from their communities, and conducting fishing expeditions for information about movements. Despite the government’s claims that grand juries are necessary to uphold the law and create a just society, their true purpose has been demonstrated in the persecution of people ranging from journalists who refused to identify their sources to five of the Black Panthers known as the San Francisco 8 to activists involved in the Puerto Rican independence movement to earth and animal liberation activists.

The Community RNC Arrestee Support Structure (CRASS) and Coldsnap Legal Collective have been involved in supporting people unjustly arrested, prosecuted, and incarcerated since the Republican National Convention invaded St. Paul in September 2008. Many of us experienced state repression first-hand in the streets of St. Paul, and we all witnessed it in the courts as we saw person after person prosecuted more for expressing their dissent than for any illegal acts alleged to have occurred. We have not forgotten our experiences. And we are not blind to the connections between what we experienced, what Carrie and Scott are experiencing, and what all targets of state repression experience.

We demand that Carrie be released immediately, that the charges against Scott be dropped immediately, and that the government abandon its attempts to punish them for their political beliefs. We stand in solidarity with Carrie, Scott, and all those who are imprisoned for their political beliefs and for having the courage to fight back against the system that is destroying the Earth and threatening our lives.

We also call on all people of conscience who are working to change this world to support them. Visit http://davenportgrandjury.wordpress.com for more information and updates. You can also donate to their support fund there and find out more about how you can support them. A movement is only as strong as its prisoner support, and Carrie and Scott need our solidarity now more than ever.

In solidarity and resistance,

More information on this case:

On October 19, 2008, New Street University (Petersburg), Humane Education (Moscow), and OD Group (Moscow) carried out a joint action in a pedestrian underpass on Nevsky Prospect. During the action, which took the form of a man-on-the-street survey, real live sociologists from Moscow pretended to be sociologists, while a rather large live frog was offered up as a sacrifice to passersby.

Stop the Murder of Frogs on Russian Soil!
In the biology department of Moscow State University, antiquated models of education hold sway. It is not only students who suffer from this, but even frogs. The department has not updated its educational methods since Soviet times. In particular, our little green pals are regularly subjected to archaic, bloodthirsty lab experiments.  It is not only students whose future careers will require them to be able to work with lab animals who are forced to engage in these practices, but also those who have chosen theoretical majors. Many students have spoken out, asking that students who have chosen one of these specialities be granted the right not to take part in such experiments. One fifth-year student was expelled for refusing to taking part in these unlawful experiments.

There is an alternative—Humane Education! Students can practice on artificial frogs (cats, etc.) and thus gain control of the production of knowledge. END_OF_DOCUMENT_TOKEN_TO_BE_REPLACED