On 22nd April, Roza Tuletaeva, one of the activists from the Zhanaozen oil workers’ strike, started a hunger strike. She has taken this extreme step because she has been refused essential medical aid at the women’s prison colony in Atyrau, where she is currently serving a lengthy jail sentence. She was arrested after the notorious massacre of Zhanaozen oil workers’ by government forces in December 2011 and sentenced to seven years in prison (later reduced to five, on appeal), on the charge of “organising mass disorder.”

According to friends and relatives of Roza, she is suffering from chronic liver disease. The refusal to provide suitable treatment appears to be intentional revenge by the authorities. It is a form of torture against this political prisoner, who refused to accept that she was guilty as charged.

During her court trial, Roza experienced torture and sexual harassment at the hands of the state security police (KNB), and the lives of her children were threatened. Nevertheless, she refused to give evidence against herself and her co-strikers, refused to give evidence against Vladimir Kozlov, leader of the Party Alga (who was later sentenced to a prison sentence), and exposed the methods of the investigators during her trial.

Local human rights organisations have demanded the immediate provision of medical assistance to Roza Tuletaeva and have also demanded the right to visit her to make a proper assessment of her health. Clearly she is in danger, her health is already undermined and now her life is at risk. The hunger strike is eroding her health even further.

Campaign Kazakhstan calls for protest messages against these further attempts at torture, which are organized by government forces with the aim of breaking the will of Roza and her comrades and of anyone else prepared to resist the authorities. By attempting to physically annihilate Roza Tuletaeva, they are trying to scare all oil workers, and those who live in the Mangystau region, from further protest actions.

Freedom to the arrested oil-workers and political prisoners in Kazakhstan!

Please send urgent protests to the Embassy of Kazakhstan in your country (a list can be found here) and copies to kazakhstansolidarity@gmail.com and campaignkazakhstan@gmail.com. 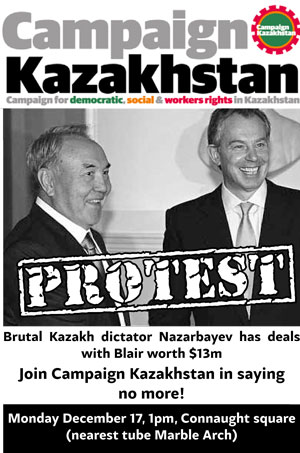 Kazakhstan is a one man dictatorship. Workers across the country are paid starvation wages whilst a tiny minority become fabulously wealthy. When people stand up for their social, human, workers rights, they face vicious repression. Kazakhstan is constantly ranked amongst the lowest in the world for press freedom, human rights, but amongst the highest for corruption and embezzlement. Tony Blair has acted as an apologist for this regime, speaking on its behalf many times.

But this has not stopped people fighting back. The repression is met with a heroic fighback by many in Kazakhstan. Kazakh president Nazarbayev is preparing the way to become the next Mubarrak or Ben Ali.

Aron Atabek
Aron Atabek, a poet and dissident, has been imprisoned for 5 years now for supporting the struggle of residents of Shanrak. They were evicted with no offer of alternative accommodation. For the ‘crime’ of helping in negotiations with the authorities and the residents, Aron was sentenced to 18 years. He has been in solitary confinement for 2 years, denied access to his family. This is illegal under international law. We demand his immediate release, along with all those imprisoned as a result of the Shanrak struggle.

Vadim Kuramshin
Human rights activist and lawyer Vadim Kuramshin has recently been sentenced for 12 years in a retrial, after a jury threw out the charges a few months earlier. Getting rid of all pretense of a fair trial, neither Vadim nor his representatives were not allowed to attend.

Vadim is in prison simply because he is a throrn in the side of the regime, highlighting the many human rights abuses that occur throughout Kazakhstan. For more details on the campaign for Vadim, see our website below.

Campaign Kazakhstan appeals to human rights and press freedom organisations, trade unionists and all those who support democratic, social, worker and political rights in Kazakhstan to:

a) Add their names to the list of sponsors and supporters of the campaign
b) Send letters of protest about the denial of democratic rights in Kazakhstan
c) Spread the word about the situation in Kazakhstan
d) Join protests, lobbies and other campaigns
e) Make a donation through the website and ask your colleagues, family and friends to do the same

A year ago, on Dec. 15, 2011,  Kazakhstan state security forces opened fire with U.S.-supplied weapons on oil workers on strike since the preceding May for increased wages and better conditions in the Caspian Sea company town of Zhanaozen. According to the official count, 15 workers died and upwards of 70 were wounded. Unofficial accounts reported much higher number of casualties.  Several hundred miles to the east in the capital, Astana, business went on as usual that day for the Western faculty members and administrators at the recently built multi-billion dollar Nazarbayev University, a joint venture involving the country’s authoritarian regime, the World Bank, and a number of major, primarily US “partnering” universities. This is the first of a three-part series, stimulated by news of the “Zhanaozen Massacre” and initial word of “global university” dealings in Kazakhstan.

A number of prestigious, primarily U.S.-based universities are quietly working with the authoritarian regime in  Kazakhstan under the dictatorial rule of the country’s “Leader for Life,” Nursultan Nazarbayev.

In a project largely shaped and brokered by the World Bank in 2009 and  2010, the regime sealed deals with some ten major U.S. and British universities and scientific research institutes. They’ve been tasked to design and guide the specialized colleges at the country’s newly constructed showcase university.

As a result, scores of academics have flocked to the resource rich, strategically located country four times the size of Texas. They remain there despite the fact that every major international human rights monitor has cited the Nazarbayev regime for its continuing abuse of  civil liberties and basic freedoms.

Kazakhstan now serves as a key hub for the application of the World Bank’s “knowledge bank” agenda, a vivid case study of the far-reaching nature of a corporate – and by extension, imperial – higher education agenda. . . .

Read the rest of the article here.

Esenbek Ukteshbayev on the Trade Union Struggle in Kazakhstan (video)

Last Saturday, Esenbek Ukteshbayev, president of the fighting independent trade union in Kazakhstan, Zhanartu, spoke in London. He brought home to an audience of more than 500 UK workers’ representatives and activists the atrocities carried out by the Nazarbayev regime against striking workers and their representatives. His address brought the sixth National Shop Stewards’ Network conference to its feet out of respect for the tremendous struggle being waged against the murderous dictatorship in his country. (Campaign Kazakhstan)

Zhanaozen city is reportedly surrounded by Internal Ministry troops in advance of the sentencing of the thirty seven oil workers and their supporters on Monday. Supporters of those on trial are planning further protests in Zhanaozen and Aktau.

Only 3 of the 37 have been cleared of all charges. Twenty one of those on trial were sentenced to either 2 or 3 years in prison, with the sentence suspended or, in a couple of cases, subject to amnesty. Thirteen activists, however, received real prison sentences ranging from three years to, in the case of Roza Tuletaeva, seven years.

Roza, a mother of three children, was one of the leading activists in the oil strike. During the trial she related how she nearly suffocated when bags were put over her head during interrogation and she was beaten with iron rods. She suffered other indignities, which she was too embarrassed to tell the court openly as her friends and relatives were present.

It is widely reported in the international press that the events of 16th December resulted from riots caused by the oil workers after seven months on strike. This is an attempt to shift the blame from the Kazakhstan state. The oil workers had planned a peaceful demonstration on 16th December.

Yet according to his court testimony given during this trial, a senior police officer was dispatched with police troops to Zhanaozen on 14 December. Instead of tear gas, rubber bullets or water cannons, weapons and live rounds were issued. Video footage from the conflict shows police firing into unarmed and peaceful protesters, often shooting people in the back. The government admits 15 people were killed, yet no charges have been lodged against the interior minister, who said he had given the order to open fire.

To avoid blame being directed at the regime itself, the General Prosecutor picked out a number of scapegoats from the local authorities and police to put on trial. Undoubtedly guilty of the crimes for which they were charged, they, nevertheless, have served the role of letting higher up figures off the hook.

Five police officers, charged with “exceeding their authority” by shooting live weapons into the crowd, received sentences of between 5 and 7 years. The Head of the Police prison, where a prisoner was so badly beaten that he later died, received 5 years for “not calling an ambulance on time”!  A former mayor and three managers of the KazMunaiGaz company also received sentences of seven years for stealing from the city’s funds and from money that should have been paid by KazMunaiGaz to local welfare funds.

More arrests and torture
Even though these sentences appear strict, they are for crimes that resulted in the death of up to 70 people, the torture and death of protesters while in police custody and the theft of literally billions of tenge from state funds. That similar sentences have been handed out to the oil workers and their supporters indicates that the regime has just been taking its revenge on the workers. None of the workers were carrying arms or can be deemed responsible for violent acts, but on the contrary conducted themselves in a peaceful and disciplined way and ended up as the victims of the police massacre and subsequent regime of terror.

It is now reported that another wave of arrests and torture is taking place. Up to 15 more activists from the oil strike, along with leaders of the opposition political party Alga, are expected to be put on trial for “inciting social discontent” with a possible sentence of up to 12 years.  Large numbers of trade union activists from the OzenMunaiGaz company are being called in for questioning, in an attempt to intimidate them from organizing a new strike. Following questioning, one 51 year old activist committed suicide.

However, local trade union activists report that the workers are still determined to protest, whether outside the City mayor’s office or by preparing new strikes in the region. According to one of the local leaders, the next trial is being prepared, not to take revenge for the last strike, but to try and prevent the next one.