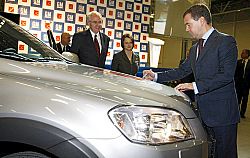 Called the “godfather” of the plant by St. Petersburg Governor Valentina Matviyenko during the event for his early involvement in the project, Medvedev talked about taking part in the groundbreaking ceremony for the plant as first deputy prime minister in 2006.

“I was given a shovel as a souvenir, which I still keep at my dacha with other gardening tools,” Medvedev, a St. Petersburg native, said before inspecting the interior of a Chevy Captiva midsize SUV presumably right off the assembly line.

Because we were busy reporting on the murders of Stanislav Markelov and Anastasia Baburova, we didn’t get round to summarizing or translating this bulletin, which was posted on the website of the Institute for Collective Action on January 25. To tell the truth, we hoped that the threats made against GM Saint Petersburg trade union leader Yevgeny Ivanov wouldn’t come true.

In January, Ivanov went public with the fact that persons unknown had been calling him and making threats. He informed the RIA Novosti news agency that someone had called him and said, “You made a mistake when you announced the formation of a trade union. It seems like you don’t care about your family.”

The formation of the trade union at the GM Petersburg plant (located in the suburb of Shushary) was announced in mid-January. The union is an affiliate of the Interregional Trade Union of Autoworkers (ITUA). Seventy of the plant’s nine hundred workers joined the new union, whose stated goal is to obtain regular wage increases for workers through a collective bargaining agreement.

Even before the creation of the new union was announced, however, Ivanov began receiving threats. Although Ivanov reported these incidents to the police, they refused to open a criminal investigation. Meanwhile, his comrades at the ITUA collected money so that Ivanov could get his family out of the city.

Now Radio Svoboda (Radio Liberty) has reported that Ivanov was attacked today (February 8, 2009) near the entrance to his house. The two assailants, according to Ivanov, said, “Greetings from the trade union!” before hitting him in the face several times. Doctors who treated Ivanov after the incident determined that he has suffered a concussion.

Like attacks against other social and political activists, assaults against trade union leaders have become all too common in Russia in recent months. We have already reported the two attacks against Ford-Vsevolozhsk union leader Alexei Etmanov, in November of last year, as well as attacks on Sergei Bryzgalov and Alexei Gramm, activists in the ITUA-affiliated union at the TagAZ plant in Taganrog, in southern Russia.

UPDATE: Fontanka.Ru has just reported more details of the assault on Ivanov. They quote him as saying, “I was going to the store. As I came out of the entrance of my building I took several professional blows to the face. There were two of them: one held the door of the entryway wide open, while the other stood around the corner. It was so unexpected that I fell over, and when I was getting up I heard one of them say, ‘Greetings from the trade union.’”
Ivanov was attacked in Kolpino, a southern suburb of Saint Petersburg.
Ironically, just two days ago, the International Metalworkers’ Federation called on Russian authorities to thoroughly investigate the continuing attacks on union activists and to find and punish the wrongdoers. Their appeal specifically mentions the threats made to Yevgeny Ivanov. As today’s attack has shown, their concern was fully warranted.

Alexei Etmanov (pictured), the leader of the Ford-Vsevelozhsk trade union and co-chairman of Interregional Trade Union of Autoworkers (ITUA) has been the target of two brutal attacks on November 8 and 13. An anonymous caller following the first assault contacted the union and warned Etmanov to stop his union activities or “we will take away your life,” the caller said. No one has been charged for the crimes and an investigation has been suspended. Other members of ITUA have been assaulted, including the leaders of the local trade union organisation of Taganrog automobile plant, Alexei Gramm and Sergei Brizgalov. Those incidents were not investigated either.

The International Metalworkers Federation is carrying out a campaign to protect the leaders of ITUA, demanding that the Russian authorities conduct a complete investigation of all cases of the assaults and to punish the guilty ones – both those that took part and those who ordered the crimes to be committed.

Please follow the link at the top of this message to sign the petition in support of Russian auto industry unionists.