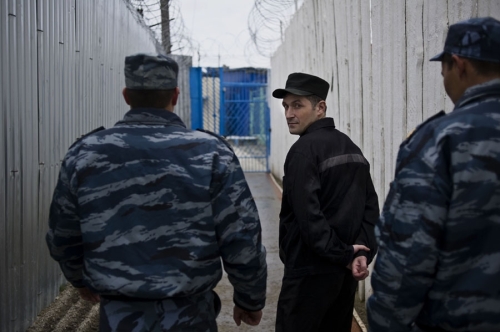 Falsely imprisoned for leading a strike in Russia

The Arthur Svensson International Prize for Trade Union Rights for 2013 is awarded to Russian trade union leader Valentin Urusov. He was falsely imprisoned after leading a strike against dangerous working conditions in the diamond industry.

“Urusov has become symbolic of the struggle for workers’ rights and freedom of association in Russia,” says Leif Sande, committee chair and head of the LO trade union Industri Energi.

The Arthur Svensson prize is a prize from a broad Norwegian trade union movement. This year’s prize goes to fearless trade union leader Valentin Urusov, who has been falsely imprisoned for many years. As the leader of the trade union Profsvoboda at Alrosa, the world’s second largest diamond mining company, he led a hunger strike with more than one thousand workers against inhumane working conditions and low pay.

After the strike, Urusov was arrested, beaten up and his life was threatened. He was forced to sign a confession admitting possession of drugs. The police had brought an executive from Alrosa along as a witness, an example of how the company controls courts and the police in the republic.

“He was imprisoned on what were clearly false accusations, and both the UN’s International Labour Organisation (ILO) and Russian and international trade union organisations have been involved in trying to get him released,” says Leif Sande, committee chair and head of the LO trade union Industri Energi, which took the initiative for the prize.

Released, but not free

Urusov was released in March of this year after it became known that he had been nominated for the Svensson prize. The rest of his five year prison sentence has been converted into a fine demanding 15% of his income throughout the remainder of his sentence. In addition, he is not permitted to leave the country.

The imprisonment and harassment of Urusov has become symbolic of the struggle for workers’ rights and freedom of association in Russia.

The committee alludes to the fact that he has full support from all the Russian trade unions, and that he was nominated for the prize by a number of trade union organisations throughout Europe. The international trade union movement, led by the International Trade Union Confederation, has been highly involved in his case.

“The Arthur Svensson international prize is first and foremost a helping hand – and an acknowledgment – to union officials and trade unionists around the world fighting for workers’ rights under dangerous conditions,” says Sande. We thank this year’s recipient of the prize, Valentin Urusov, for his courage in the fight against poor working conditions in the Russian diamond industry.

In their citation, the committee write that they are concerned about the workers’ rights situation in Russia. The right of free association, right to collective bargaining and right to strike have long been under pressure, and it may appear that conditions are deteriorating further under Putin’s current regime. Thus, the prize is also being awarded to bring these conditions into focus, and in support of Russian workers.

For more information about the prize: www.svenssonprize.com

The Arthur Svensson International Prize for Trade Union Rights is awarded to individuals who, or organisations which, have made noteworthy efforts to promote the work of trade unions and workers’ rights nationally and internationally. Last year’s prize went to the Cambodian trade union the Coalition of Cambodia Apparel Workers Democratic Union, C.CAWDU. The prize is NOK 500,000 and is awarded annually. The prize is named for the former leader of the Norwegian Union of Chemical Industry Workers, Arthur Svensson, who was especially engaged in international solidarity.

This year, the prize will be awarded during a formal ceremony held at Folkets Hus on 19 June.