Russia: Reading Aloud in Public Is Illegal (Protest against the Torture of Russian Prisoners)

On November 26, a protest against the torture of Russian prisoners took place outside the headquarters of the Federal Penitentiary Service in Moscow. The protest was occasioned by the conflict in penal colony № 6 in Kopeisk. Police detained more than ten people during the protest.

This is how the protest was announced on Facebook:

On November 26 at 6:00 p.m, a protest against torture in Russian prisons will take place outside the headquarters of the Federal Penitentiary Service at Zhitnaya 14.

We protest against torture in Russian prisons and support the inmates in Kopeisk, who spoke out against bullying, extortion and sexual abuse. During the protest, we will be reading prisoners’ stories of torture and humiliation aloud. We are convinced that the public should be aware of what is actually going on in Russian prisons. And not just be aware, but try and stop this nightmare.

At penal colony no. 6 in Kopeisk in the Chelyabinsk region, more than a thousand prisoners have for several days refused to go inside in protest against torture and beatings. Silently, lined up, they stand in the cold for several hours. They refuse to eat, believing that it is better to die than to continue to suffer torture, humiliation and blackmail. 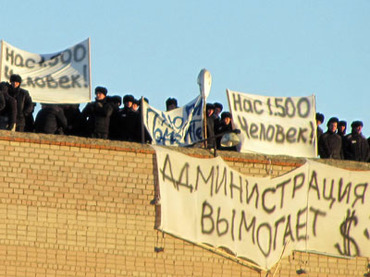 A group of convicts seized the guard tower in the industrial area of the colony and hung up a banner with the message “People, help us!” Riot police were deployed to the colony; they attacked prisoners’ relatives who had gathered outside the prison gates. People were beaten bloody and the windows of their cars were smashed. Among the victims was human rights activist Oksana Trufanova. “I heard [the command] ‘Beat!’ and the relatives were attacked by men in black masks and uniforms wielding clubs,” she said in an interview. “Everyone fled, but [the riot police] ran many people down. Personally, I was hit on the head and pushed to the ground. I told them I was a human rights activist, but they told me rudely, using obscene language, to keep quiet or I’d get another whacking.”
Even now the authorities are trying to convince us that nothing has happened, and that journalists have exaggerated the scale of the protests. That is why it is so important not to let them hush up this outrage.We demand:

–  An objective investigation of all allegations of torture and extortion in the colony, and an open trial of Federal Penitentiary Service employees implicated in them.
– The punishment of Interior Ministry officers who employed violence against family members and human rights activists gathered outside colony no. 6.

Why the prisoners “rioted”:

Olga Belousova, the sister of one of the inmates, was allowed inside Penal Colony No. 6 along with two other relatives. As a witness, she was able to speak to the press about the situation there.

“There were 60 people in the room; all were standing quietly,” Belousova said. “I told them that we support them and came to make sure that everything is fine, and that we want to make their voices heard outside the colony.”

The complaints, which were mainly communicated by the prisoners, include enormous extortions, inappropriate use of force and numerous other humiliations, Belousova says.

“They don’t touch those who give them money, but against those who can’t they use force to make their relatives pay,” she added.

Former convict Mikhail Ermuraky believes that this system of exploitation was a main reason for the riot.

His mother said her son was tortured multiple times, sometimes even including with sexual abuse.

“They start beating those who don’t want to pay,” said Ermuraky in a recent interview with the RIA Novosti news agency.

The father of another convict, who spent three months in colony No.6, told Russia’s Dozhd television that he has twice paid off prison staff.

“Every month… If you don’t bring money, there will be problems,” a man who wasn’t named told Dozhd.

Payments in prison are typically euphemized as “voluntary contributions.” Local human rights ombudsman Aleksey Sevastianov has noted complaints from relatives that such “contributions” can sometimes reach up to 200,000 rubles – more than $6,400. For comparison, the average Russian’s annual income is just over $10,000.

For convicts, such sums are impossible to pay – roughly half the prisoners in the colony are not employed. Those who do have jobs in the prison are paid extremely little – less than 100 rubles, or just over $2, per month. Such a wage is not enough even to buy food in a convenience store in the territory, where prices are said to be higher than in the town.

The head of the detention facility met with inmates’ relatives after the uprising, assuring them that he is willing to abolish “the system of contributions.” However, relatives now fear that this change could bring retaliation from the prison staff.

When asked if such a system could be considered as criminal corruption, human rights ombudsman Sevastianov agreed that it is illegal, and should be investigated.

He explained that with the scheme working in the facility, relatives wire money to a bank account given by the colony’s administration. Thus, for example, millions of rubles sent by convicts’ families were spent to build a new church on the territory.