Pussy Riot rocker Nadezhda Tolokonnikova declared a hunger strike Wednesday, minutes after a Moscow court ruled that she must finish preparing her defense by July 9. 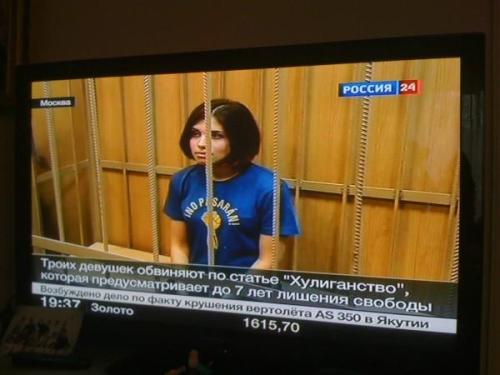 Tolokonnikova said the ruling leaves her insufficient time to read through prosecutors’ accusations and that the hunger strike was a form of protest against the court’s decision, Interfax reported.

The 23-year-old suspect still has five “books” of accusations left to read, the news agency added. Her lawyer Mark Feigin had requested until Sept. 1 to review the case materials.

The Tagansky District Court is due to pass verdict on two other band members Wednesday afternoon. Prosecutors have charged all three with hooliganism, which carries a maximum sentence of seven years’ imprisonment.

The charges relate to a February performance in Christ the Savior Cathedral at which the female punk group sang an anti-government song called “Mother of God, Cast Putin Out!”

Police detained at least six protesters, including three who had chained themselves into metal cages, an apparent reference to the fact that suspects in Russian court cases await judges’ verdicts from metal cages.

The Pussy Riot case has caused a storm of controversy since the women’s detention in March.

On June 27, 103 Russian cultural figures, including actress and charity figure Chulpan Khamatova and Soviet-era director Mark Zakharov, wrote an open letter to the Supreme Court arguing that the band members had not committed a criminal offense.

“We see no legal basis or practical reason for the further isolation of these young women, who do not pose any real danger to society,” the letter said.

International musicians, including Beastie Boys member Adam Horowitz and Californian rock group Faith No More, have added their voice to efforts to secure the women’s release.