The notice of formal charges against Nadezhda Andreyevna Tolokonnikova, as filed on May 21, 2012, by Lieutenant Colonel A.V. Ranchenkov, judicial investigator of the second bureau of the Investigative Department of the Investigative Directorate of the Directorate for Internal Affairs for the Central Administrative District of the Main Directorate of the Russian Ministry of Internal Affairs for the City of Moscow, and reproduced in the LiveJournal blog of attorney Mark Feygin. 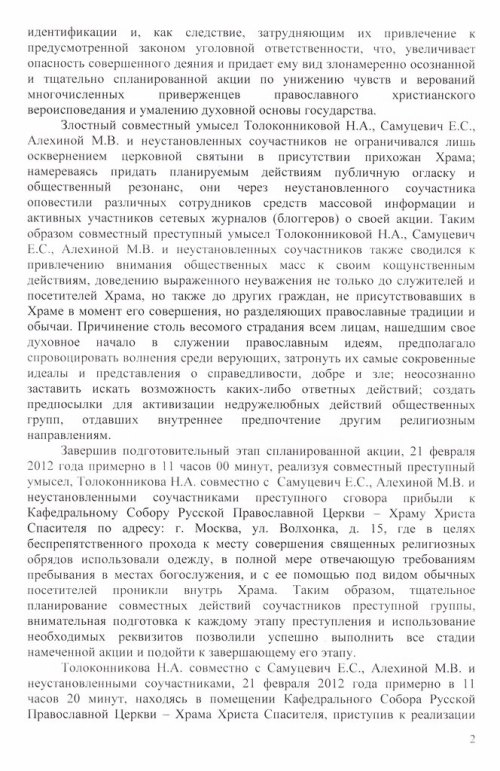 The so-called content of Lieutenant Colonel Ranchenkov’s “formal charges” is such a potent mix of medieval obscurantism, newspeak and a plagiarized high school term paper that you involuntarily imagine you’re reading an elaborate parody. But it’s not a parody: it’s all the “Russian justice system” has managed to cobble together after holding Nadya Tolokonnikova, Masha Alyokhina and Katya Samutsevich in jail for three months and counting. Never mind that “formal charges” of this sort would be laughed out of court in any country that has even a figment of a real legal system. What’s worse is the implied message: we don’t even have to try and make a real case, because the verdict will just be phoned in to the judge when the case goes to trial. Worse still, after reading this crap, is the sense of total societal and linguistic collapse. Not to mention the overwhelming impression of “legal nihilism,” to invoke a phrase beloved of Russia’s previous so-called president.

We would usually attempt a total or partial translation of the above so-called legal document. But this is beyond our powers in this case. Besides, we have what is left of our immortal souls to worry about, and prolonged contact with satanic texts like the one above is prescribed for actual Christians. So instead we’ll encourage you to contribute to the legal defense of Tolokonnikova, Alyokhina and Samutsevich.

All empires spin self-serving myths, and in the United States the most potent of these is that America is a force for democracy around the world. Yet there is a tradition of American anti-imperialism that gives the lie to this mythology. Seymour examines this complex relationship from the American Revolution to the present-day.

This event was co-sponsored by Haymarket Books and the Howard Zinn Memorial Lecture Series.

RICHARD SEYMOUR is a socialist writer and columnist and runs the blog Lenin’s Tomb. He is the author of The Liberal Defense of Murder and The Meaning of David Cameron. He has appeared on Democracy Now!, and written for The Guardian, The New Statesman, Radical Philosophy and Historical Materialism. Originally from Northern Ireland, he now resides in London, where he is studying for a PhD at the London School of Economics.