The Unbearable Lightness of Saint Petersburg

Actor Oleg Basilashvili and author Boris Strugatsky were among artists, teachers and rights activists who wrote an open letter to Prime Minister Vladimir Putin on Tuesday asking him to deny City Governor Valentina Matviyenko’s request to exclude St. Petersburg from the Register of Historic Settlements.

“Recent years have demonstrated convincingly that the city authorities are not capable and, more importantly, do not want to protect the historic center of St. Petersburg,” they wrote in the letter.

“The ‘planning mistakes’ that appear one after another, distorting the unique appearance of our city, are a direct consequence of the permits and authorizations issued by the city authorities.”

The letter cites the new Stockmann building erected in place of two historic buildings demolished to make way for the Finnish department store, which has altered the view of the portion of Nevsky Prospekt close to Ploshchad Vosstaniya, and the 19th-century Literary House on the corner of Nevsky Prospekt and the Fontanka River that is being demolished right now, as the most recent examples. 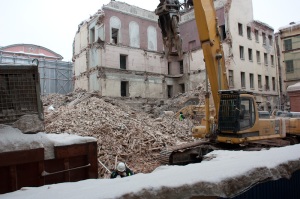 Matviyenko’s letter to Putin, in which she asked him to strip St. Petersburg of its historic status, was leaked to the press last week. According to an article published by Kommersant on Thursday, City Hall deemed the city’s protected status as a historical settlement to be “excessive,” hindering investment projects and construction activities.

St. Petersburg was included in the Register of Historic Settlements in July, along with 40 other Russian cities. The status implies stricter control over valuable historical objects and demands that the local authorities authorize construction plans and regulations with Rosokhrankultura, the Ministry of Culture’s heritage watchdog.

“Considering that neither Pskov, Novgorod or Moscow have been included on the register, I am asking you to consider excluding St. Petersburg from the said register,” wrote Matviyenko to Putin, according to Kommersant.

Since taking office in 2003, Matviyenko has been accused of overseeing the gradual destruction of St. Petersburg’s cultural heritage. According to preservationist organization Living City, more than 100 historic buildings, including six on Nevsky Prospekt, have been demolished during her tenure.

Late last year, Matviyenko made moves toward preservationist activists, inviting them to take part in a discussion — an initiative that appears to have reached a deadlock over the scandal caused by the demolition of the Literary House at 68 Nevsky begun on Jan. 7.

“I appreciate the activities of preservationist organizations; they are sincere in their care for the city, and I am open to dialogue,” Matviyenko was quoted as saying in November.

“Preservationists and the city authorities are interested in the same thing — in effective work to preserve historic heritage.” Matviyenko also offered the job of deputy chair of the [city’s] heritage protection committee to Living City coordinator Yulia Minutina, who works as a schoolteacher.

In late January, after film director Alexander Sokurov spearheaded an unsuccessful campaign to stop the demolition of the Literary House, City Hall’s stance seemed to change.

“Teachers should teach, doctors should treat patients, film directors should make movies; if people attempt to do a job for which they are not qualified, mess and madness ensue,” Deputy Governor Roman Filimonov was quoted as saying last week. 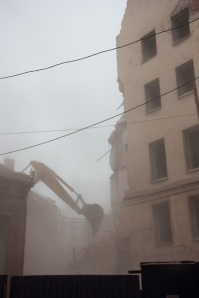 Activists of Living City and a newly formed group called Nevsky 68 continue to picket the building, collecting signatures for a petition to President Dmitry Medvedev.

Their demands include a halt to all the work, the future conservation of the site, punishment of the city officials responsible for the destruction of the historic building, the withdrawal of permits and the site from its current owner and a broad public discussion on the restoration of the building.

Photos by Sergey Chernov. See his entire photo reportage of the destruction of the Literary House here.