The English translation of The Occupation Cookbook, authored by the University of Zagreb students who took over the Faculty of Humanities and Social Sciences for thirty-five days last year, is online now. Here is an excerpt from Boris Buden’s introduction:

In Europe today, wherever people resist in the name of the old social rights, they become the enemies of progress and prosperity, freedom and democracy; in short: they become the enemies of Europe whose acquired social rights, such as the right to education, appear as the privileges of the social parasites, which are to be abolished on the road to better future. So this is how it has been in Zagreb last year, this is how it was and is in Vienna and wherever one dares to challenge the existing hegemony. But what divides this world, what the students have stood up against to, unites them too, wherever they raise their protests. Thus, they are today fighting neither in the center, nor in the periphery of the neo-liberal capitalism – they are fighting this very difference, that is to say the hegemony that forces us do differentiate the world in such a manner. Solidarity is neither the prerequisite nor the product of this struggle, but its actual form. 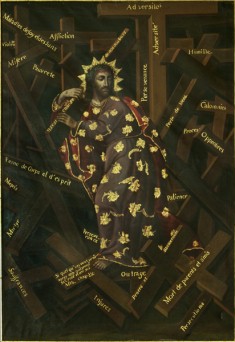 Artists, curators, theorists, and “correspondents” will come together during the workshops which are part of the Potosí Principle exhibition to discuss and elaborate the following topics: How can we describe colonial as well as contemporary global contexts with Marx’s principle of “primitive accumulation”? How and where is cultural hegemony being produced? Which artistic interventions or practices and which dissenting voices can undermine the standards of a “universal museum” within an internationalised world?