“Corruption as a means to ending poverty”

The two men also shared jokes about their tastes in music, with Bono declaring: “I come here to cross the great divide between me, a Led Zeppelin fan, and you, the Deep Purple fan.”

Medvedev, who has made much fuss of his devotion to the veteran British hard rock group, chuckled but replied in English that he also counted Led Zeppelin amongst his favorites.

Bono later said in a statement that he and the Kremlin chief had also discussed corruption as a means to ending poverty. 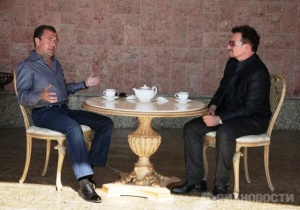 UPDATE. Bono’s lovely tea by the seaside with the Deep Purple fan club president seems to have had no effect on the shabby juggernaut known as the Russian police state. Here is what happened at his musical ensemble’s concert in Moscow yesterday:

We’re seeing reports via Twitter that police shut down booths/tables belonging to some of U2’s favorite humanitarian groups before tonight’s concert in Moscow, and that one volunteer may have been arrested.

This Greenpeace Russia blog post seems to be saying that information tents belonging to Greenpeace, the ONE Campaign, and Amnesty International were closed by police, who said that volunteers “staged a picket” unlawfully (via Google Translate) outside the concert. The post says that Bono has been informed and that U2 is “perplexed” over what happened.

There were articles in Russian media this week saying that 2,100 police officers and Interior Ministry troops would be handling security and, indeed, many of the fan photos being posted from inside the stadium (like the one above right from @kardanik) show security almost everywhere you look.

Update: This story from Gazeta.ru says “several” Amnesty International activists who were holding up signs with humanitarian slogans were detained.

Tagged as Amnesty International, corruption as a means to ending poverty, Greenpeace, Russian police state, the powerful of this world enjoy each other's company, U2 sucks