“Put Away Your Bubbles”

Young people who gathered to celebrate spring with an annual bubble-blowing flash mob in St. Petersburg were attacked by an organized gang of men, thought to be neo-Nazis, and then dispersed by the police Sunday. Organizers believe the attackers mistook the flash mob for a gay pride event.

It was the third year running that the event, known as both “Dream Flash” and “Soapy Piter,” was held in the city. It presents itself as “non-political,” and mostly attracts teenagers.

“It has nothing to do with the gay community, or with any political, ideological or any other organization,” said Yulia, Dream Flash’s organizer, by phone on Monday. She requested that her last name be withheld from publication.

“It’s simply a celebration of spring, with the idea that a group of people come together and walk around the city center blowing bubbles and enjoying spring. There was also supposed to be an amateur photography competition, so there were two goals — to have a good time and take pictures of bubbles.”

As an estimated 500 stood blowing bubbles on the steps of Gorkovskaya metro station and in the surrounding Alexandrovsky Park at about 4 p.m. — the agreed time for the start of the flash mob, a flare was thrown into the crowd as an organized group of more than 30 men ran toward the participants and started attacking them. Several people had fallen to the ground before the attackers retreated at the sight of the OMON riot police approaching. At least one of the attackers was arrested. 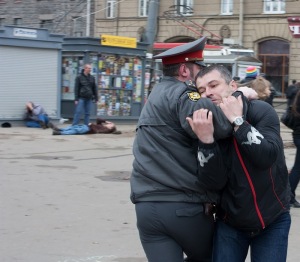 Later reports said that at least one person was suffering from a concussion and another had been wounded by a rubber bullet from an attacker’s gun, but these remained unconfirmed on Monday evening.

During preparations for the event, a gay activist began advertising a gay pride event within Dream Flash several days before the planned event.

“These are two different events; they are not connected to each other at all,” Yulia said.

“When I found out about it, I started to correspond with them, asking them to separate the two events, but they refused, because they thought our event was very suitable for them, and that we were ‘gay friendly.’ We corresponded for three days but it led to nothing.”

Valery Sozayev, the chair of the gay rights organization Vykhod, described the actions of the gay activists behind the promotion of their event as a “provocation.”

“Soap bubbles are rainbow-like and iridescent, and that’s why people use a lot of rainbow symbolism at [bubble-blowing] events, but it has nothing to do with the LGBT (Lesbian, Gay, Bi-Sexual and Transgender) community,” Sozayev said.

“Obviously, part of the LGBT community joins the event in every city where it takes place, but they do so as everybody else does, without positioning it as an LGBT event.”

Organizers and participants believe that neo-Nazis were behind the attack.

“I suspect that it was representatives of ultra-right organizations who found out that gays were going to come to the event and decided to stop it,” Yulia said, adding that she came across a group called “Stop the Gay Parade” on Vkontakte, the Russian Facebook-like social networking site.

“I wrote to one of the organizers, gave him my phone number and asked him to contact me, explaining that innocent people might suffer because of their initiative, but the organizer didn’t reply,” Yulia said.

Several minutes after the attack, the OMON police declared the event an “illegal meeting” and started to drive the participants, many of whom continued to blow bubbles, away from the metro and then out of the park, with the help of two police vehicles.

“Put away your bubbles,” one police officer commanded through a megaphone.

“I said to them that we had talked to a representative of City Hall, who said that our event was not subject to any law, because — and I quote — ‘We can’t forbid you to walk around the city.’

“Unfortunately, I was not provided with any written confirmation of this conversation, and the only thing I could do in the situation that arose yesterday was to agree with the police’s actions and ask everybody to leave.”

According to Yulia, she and two other organizers were among about 30 participants who ended up in a police precinct and were released after about five hours, after being charged with walking on the grass (a charge denied by the organizers). At least three people who filmed the event were detained, two of whom later complained of police aggression and violence.

The police spokesman did not answer his phone when called repeatedly Monday.

All photos by Sergey Chernov. See his complete photo reportage of the bubble-blowing riot here.