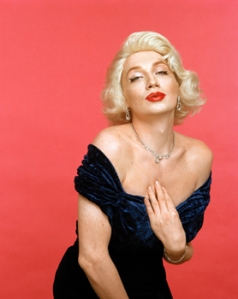 “Gender Check” is the first comprehensive exhibition featuring art from Eastern Europe since the 1960s based on the theme of gender roles. 20 years after the fall of the Berlin Wall, the curator Bojana Pejić, along with a team of experts from 24 different countries, has put together a selection of over 400 works including paintings, sculpture, installations, photography, posters, films andvideos. With over 200 artists, the exhibition paints an exceptionally diverse picture of a chapter in art history that until recently had been largely unknown and that could also act as an important addition to contemporary gender discourse.”Gender Check” follows the changes in the representation of male and female role models in art – especially as they develop under different socio-political conditions. The exhibition shows the interrelationship between art and history following both a chronological and thematic approach: During the 1960s, Socialist Realism portrayed both male and female workers as heroic figures symbolizing the officially propagated ideal of a “genderless society,” while at the same time behind the scenes, this image was unmasked by unofficial art. Beginning in the 1970s and as part of a general trend towards liberalization, masculinity and femininity began to be reassessed outside of the propagandistic clichés of the past. New representations of the body displayed an increasing self-confidence and an open sexuality that called the heterosexual norms and heroic ideals of masculinity into question. With the fall of the wall in 1989, and the growing influence of consumerism from the West, new freedoms were found that however were also accompanied by new neo-conservative role constraints. And with this, a critique of chauvinist, militaristic, misogynist and xenophobic ideologies came to become an important topic in art.

International experts have been invited to speak about the role of feminist theories in Eastern Europe with respect to a western context, about the significance of transgender positions as well as the new definition and revision of canonic ideals of gender.

7:30 pm: Performance: Eglė Rakauskaitė – For Guilty without the Guilt. Trap. Expulsion from Paradise

Underground Man is a project that consists of performance, film screenings, conversation, installation, and a publication that takes method acting as a starting point. This way of acting or dealing with form, language, and representation is one of the most discussed methods in theatre and film, but within contemporary art it is applied in a more disguised (or natural) manner. This project, a case study of sorts, questions if method acting is a way to curb the self within a highly constructed and staged society. How do we act and how do we look at what is depicted?

The title refers to Dostoevsky’s Notes from Underground in which the author portrays humans as irrational, uncontrollable, and uncooperative. The novel was considered a forerunner of existentialist thought and conjures up notions of going undercover in order to find information, to move in a space between the collective and the individual, off stage and on stage, between visibility and invisibility, and to be able to stage a context for oneself in order to act upon freely.

In trying to find a new language to discuss the way we live and work, method acting is a metaphor not only for actors. With this in mind, it allows the self to respond differently and flexibly in new situations. But it requires a fine balance between memory and the present-bridging expressions between nature and artificiality, subject, and object-to create radical breaks with the past for the sake of continuity. What becomes visible and what stays invisible? How do we choose?

As method acting requires the use of the self for the sake of external representation, the artists in this project respond to thoughts on form and method, surface and interior, and incorporate performance and film.

Eliza Newman-Saul’s 20-minute performance, Everything is Equally Familiar, creates a unique moment of disembodiment by isolating the performer’s body and voice. The performance installation can be viewed in the gallery until January 16, 2010. The script is available as a small publication.

Public conversation between Renske Janssen, Eliza Newman-Saul, Judy Radul, and Sharon Kahanoff. The subjects will range from work descriptions and anecdotes to contemplation on the power of representation and the potential of suspense

All programs are free and open to the public.

Renske Janssen is a curator at the Witte de With Center for Contemporary Art in Rotterdam. Eliza Newman-Saul is an American artist currently based in Dublin.

Artspeak gratefully acknowledges the support of Vancity Theatre, The Canada Council for the Arts, British Columbia Arts Council and Gaming Commission, City of Vancouver, and donors.

Four antifascist activists were detained by the police after being beaten by nationalists at a “Russian March” rally in St. Petersburg on People’s Unity Day, a recently introduced public holiday, on Wednesday. They were charged with disorderly conduct and forced to spend the night at a nearby police precinct before being taken to court and released at 2 p.m. on Thursday.

Six activists had unfurled a banner reading “Trash nationalism” and chanted an anti-fascist slogan at a nationalist rally at the remote Polyustrovsky Park in the city’s north when they were attacked by the nationalists.

A Rosbalt video shows the antifascist protest being disrupted by a young man wearing a camouflage jacket, who ran at the protesters, kicking and punching an activist. More nationalist marchers joined the beating immediately, before the police had time to stop it. The whole antifascist protest only lasted about one minute. 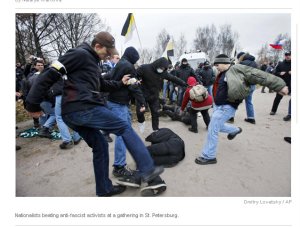 “There were many of them; about five jumped on me alone,” Katya, an activist who asked for her last name to be withheld, said by phone Thursday. She described herself as “a member of the antifascist movement.”

“They surrounded us, and the first one jumped on and kicked our comrade, causing him to fall down, and the rest followed suit.”

The police, who soon intervened, detained four antifascist activists and one attacker. The detainees were brought to Police Precinct 66, where they were charged with disorderly conduct.

“We were accused of using profane language,” Katya said.

“But you could say that the slogan we were chanting came true, because the fascists jumped on us, and the authorities arrested us — even though we were standing there peacefully without going for anybody. We simply came and expressed our opinion about the gathering.”

On their way to court on Thursday, the detainees were taken to the Interior Ministry department to have their fingerprints taken. They refused because the procedure cannot by law be insisted upon for minor offences, according to Katya.

“They took offence, but didn’t beat us,” she said.

At the activists’ request, the judge transferred their cases to their respective local courts. The offense they were charged with is typically punished with a 500 to 1,000 ruble ($17 to $34) fine. However, offenders can alternatively be sentenced to up to 15 days in custody.

Organized by the Slavic Union, the “Russian March” drew around 250 activists from different nationalist groups, including extreme ones. Formed in 1999, the Slavic Union (Slavyansky Soyuz) describes itself as “national-socialist,” frequently abbreviates its name to “SS” and uses a swastika-like symbol as its emblem.

The People’s Unity Day holiday was introduced in 2005 as a replacement for the Great October Socialist Revolution Day (the Day of Accord and Reconciliation since 1996), formerly celebrated on Nov. 7. The new holiday marks a 1612 victory over the Poles.

From its inception, the holiday has been used by nationalists for holding “Russian Marches,” nationalist rallies held in a number of Russian cities. In St. Petersburg on Wednesday, the nationalists, unhindered by the police, chanted “Russia Is for Russians” and openly racist slogans.

Meanwhile, on the other side of town, United Russia officials and their “supporters” were also hollering Slava Rossii! (“Glory to Russia!”), just like the fascists who beat up our comrades. Go figure. (Watch the video here.)