The Brass Liberation Orchestra Does Whole Foods. (Thanks to Stuffed and Starved.)

Feeling conservatives had “usurped” the limelight in the debate over healthcare reform through a series of high profile stunts and remarks, advocates of reform staged a goofy counter-attack, forming a flash mob Sept. 26 in an Oakland Whole Foods in response to the CEO’s recent Op-Ed in the Wall Street Journal in which he argued healthcare is not an intrinsic right.

At 6:11 p.m., 35 protesters, who had been fake-shopping the aisles of the green foods giant, convened at the middle of the store, and launched into singing “Hey Mackey, you’re a swine,” some shouting it into a megaphone and others dancing a choreographed jig as a live orchestra blared from all directions.

One of the market’s security guards, visibly overwhelmed, questioned the group and eventually police were called, but no complaints have been filed. Seeing the store had no plans to interfere, the performers completed two renditions, then leisurely filed out through an entrance to stage a continued demonstration on the sidewalk.

The market’s manager declined comment. An employee at the customer service desk griped that the group was likely ill-informed about CEO John Mackey’s stance on healthcare. He suggested the large turnout had more to do with the ease of arranging protests through social networking Web sites than anything pithy.

The presumably liberal audience was otherwise receptive. One or two shoppers joined the action. Even employees struggled to hide their amusement by the outburst.

There were some extreme reactions.

One patron who was shocked to discover Mackey’s stance on healthcare reform left the store vowing to join the nationwide boycott of Whole Foods. Another shopper argued that despite his stance on healthcare reform, the Whole Foods founder should be commended for helping improve the country’s diet by offering a health foods alternative that has contributed to keeping Americans out of the hospital.

Organizers dubbed the event a wild success, but admitted the true test — whether wind of the event travels beyond the liberal Bay Area — had yet to come.

(Media organizations wishing to obtain a clip of this video, contact video journalist Cassidy Friedman at cassidyfriedman@gmail.com or 415.717.1485)

Babi Badalov: A Voice from the Asylum Jungle

We’ve posted here a couple of times about the travails and triumphs of our good friend the gay Azeri artist and activist Babi Badalov. Babi is now alive and well and seeking asylum in France. The other day he sent us the first two parts of a long poem that he’s writing about what he calls the “immigration asylum jungle system” in the UK and EU. He prefaced these poetic missives with the following self-captioned photograph, which was apparently taken by a police or press helicopter during the November 2006 riot at the Harmondsworth migrant detention center, in west London. As you’ll see from the caption, Babi was an inmate at the center during the riot. It was the first stop on a long odyssey that eventually led first to a brief, productive respite in Cardiff and then to his removal from the UK last autumn, after his asylum application was rejected, despite  a vigorous campaign on his behalf in Wales and elsewhere.

Babi’s poem, “VOICE FROM IMMIGRANT ASYLIM JUNGLE SYSTEM in EU,” is below the cut. 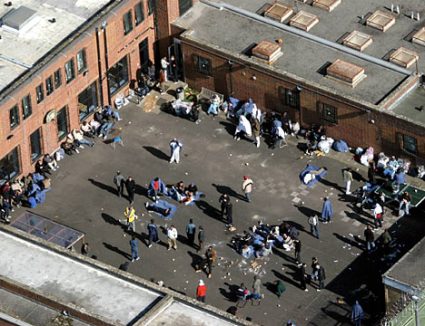 You Can See Me on the Right Side Seat on Table