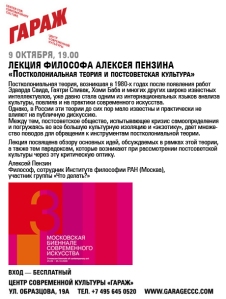 A Lecture by Philosopher Alexei Penzin:

Emerging in the 1980s from the works of Edward Said, Gayatri Spivak, Homi Baba, and many other well-known intellectuals, postcolonial theory has long ago become an international idiom for culture analysis and has also influenced contemporary art practices. In Russia, however, these theories are still little known and have practically no impact on public debate. And yet, as it undergoes an identity crisis and slips ever further into cultural isolation and “exoticism,” post-Soviet society supplies us with many reasons to employ the instruments of postcolonial theory.

This lecture reviews the fundamental ideas of this theory while also treating the paradoxes that arise when we apply this critical optics to post-Soviet culture.

Alexei Penzin is a philosopher, a fellow at the Institute of Philosophy of the Russian Academy of Sciences (Moscow), and a member of the Chto Delat workgroup.

Admission is free. Lecture in Russian.