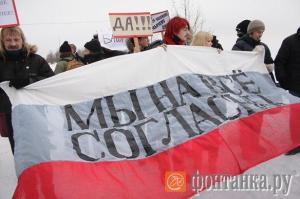 It has been a grim week for leftist activists in Russia. So it was encouraging to see that not everyone in the community has completely lost their courage—or their sense of humor. Yesterday (January 25, 2009) several dozen anti-fascists, leftists, and preservationist activists took to the streets of Saint Petersburg to express their total assent to state policies.

Well, since they totally agree with Plan Putin and all its ways, they had to do everything by the books. First of all, that meant applying in advance for a permit for their march. (We should note that this action was planned well before news came of the murders of Stanislav Markelov and Anastasia Baburova.) Second, that meant agreeing to the march route proposed to them by the police—in this case, two hundred meters of a lonely snowbound street on the far end of Vasilievsky Island, right next to the icebound Gulf of Finland. Third, that meant (more or less) “cheerfully” not resisting arrest by the police. Because, despite their enthusiastically demonstrated support of Russia’s oligarchic police state, five of the demonstrators ended up being taken to the hoosegow. Although they were later all released, they were charged were breaking the agreed rules for holding a demonstration—i.e., for crossing the road (a common charge made in the absence of any real violations), while a sixth “assenter” (who showed up at the precinct to get them out) was charged with desecrating the Russian flag (see below).

Still, one cannot help but be gladdened by the absolute precision of yesterday’s action. Subversive affirmation gets overused in protests and quasi-protest artist interventions, but this was one instance of its use when the message will be absolutely clear to anyone who reads or sees press accounts of the event. And the organizers were savvy enough to get a good press presence there for their act of utter self-abnegation. For example, local Channel 100 aired this report in its evening news broadcast:

The fetching news reader explains that the march was organized by anti-fascists and that around fifty people took part in it.

March co-organizer Alexei Yarema (whose name is misspelled in the captions) tells the Channel 100 reporter: “Right now there is nothing more important than saving the national economy. And for its sake we’re ready to sacrifice everything, including paying however much money for anything whatsoever.”

In this video, we see in the march in progress. Another of the march’s co-organizers bellows out a text expressing the marchers’ complete confidence in the ability of the country’s leadership to bring the country out of the crisis. This is followed by scenes of the arrest of him and another assenter. The cheerful anti-fascist who now has the megaphone registers his surprise that people who support the government should be arrested by the police. The clip ends with a young man, a “Saint Vladimir” icon on his chest, shouting, “Long live the dictatorship of the banks!”

An activist from DSPA (Pyotr Alexeev Resistance Movement) posted the following account of the day’s events on their LiveJournal page:

March of the Assenters
Yes, now even rank-and-file citizens have understood how heavy is the lot of activists from the Nashi and Young Guards youth movements. It turns out that it’s not so easy to carry out an action in support of the Russian government in the Northern Capital. Nevertheless, during this difficult hour for the country, simple laborers found the strength to assemble at a specially designated site on the Maritime Embankment and declare their sincere, passionate support for all the initiatives of our dearly beloved government.

After they had assembled at this lively, crowded spot (practically on the ice in the Gulf of Finland), the demonstrators raised their banners, standards, and placards in an outpouring of unanimity. They brandished such slogans as “Yes to Price Increases for Basic Products!” “Yes to Utility-Rate Hikes!” “Yes to a Twelve-Hour Workday!” “Yes!!!” “Life Has Become Better, Life Has Become Merrier!”

Chanting “More Work, Less Pay!” and “Crisis, Crisis, Go Away!” in a fit of patriotic ecstasy, the demonstrators marched the two hundred meters of their sanctioned route under the trusty protection of the police, who outnumbered them several times over. In their speeches, the action’s organizers appealed to the government to impose a tax on air and introduce an eight-day work week.

Stopping next to a picturesque bio-toilet, the martyrs were on the point of marching back in the other direction when suddenly a vigilant policeman detected in the actions of the Assenters illegal use and even desecration of the Russian Federation national flag. The fact of the matter was that some irresponsible citizen had written the phrase “We Agree to Everything!” on the flag. It was for this offense that several demonstrators, including DSPA activists, were arrested.

Moreover, the Assenters quite quickly assented to this decision on the part of the brave police and, after demonstrating a bit more, they went home. And that was the right thing to do, gentleman! If the police believe that those who support the authorities have to be put behind bars, then that’s the way it is—because the police are always right.

The more diligently our police do their jobs, the fewer people there will be who agree with the authorities! Hurrah!

In Petersburg, 5 People Are Arrested for Desecrating the Flag (Polit.Ru)

Photo Reportage: “We Agree to Everything” (Fontanka.Ru)