Stanislav Markelov Has Been Murdered 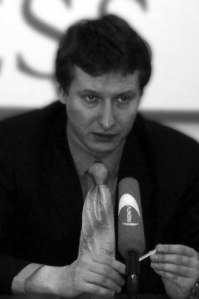 Stanislav Markelov, one of Russia’s most well-known human rights lawyers, was yesterday (January 19, 2009) gunned down by an unknown assassin in downtown Moscow. This is the latest in a series of attacks on the country’s human rights and social activists. Markelov was murdered along with Anastasia Baburova, a young journalist and anarchist activist who was accompanying Markelov after a press conference at which Markelov discussed his plans for opposing and investigating the early parole of Colonel Yuri Budanov, who was convicted in 2003 of the murder of a young Chechen woman, Elza Kungayeva, and sentenced to ten years in prison.

Although, given the recent events surrounding the parole of the war criminal Budanov, the foreign and Russian press will inevitably focus on this connection, Markelov was a hero of the Russian social movements for his work on behalf of anti-fascists, migrant workers, union activists, and others. His murder clearly has to be seen in the context of the recent string of attacks on activists in these movements, which has received little coverage in the west and little more in Russia itself.

You can find coverage of the murders in English, among other places, in the New York Times and on Robert Amsterdam’s website.

The collective at “(The) Movement” (dvizh.org) has issued the following statement:

Stanislav Markelov has been murdered. Only a few hours ago, with characteristic decisiveness and energy, he was trying to make sure Colonel Budanov, who had raped and killed a Chechen girl, a citizen of Russia, would serve out the remainder of the prison term to which he had been sentenced. Several hundred footsteps later, his body, struck down by death, was growing cold on the pavement in the very center of Moscow. There are theories as to why he was killed and who killed him, but there can be no justification for this murder. The murderer did not merely take the life of a brilliant professional, an ambitious organizer, and a witty interlocutor. In the person of Stanislav Markelov we have lost that rare thing—a lawyer who was also a public intellectual and civic activist. His profound and weighty statements were always double-edged, aimed both at achieving practical results and increasing our knowledge of our world. With confidence and elegance he would cut through the thickest layers of the falsely obvious and achieve the unachievable in the courtroom and in public discussions.

Stanislav was of the few lawyers, if not the only one, who tackled  the heaviest cases against the Russian state—and won them. He always mounted an active defense of his clients. He was man of indisputable civic genius. Stanislav succeeded in many of the things that he did, and in the future he would have done a lot more. Another famous lawyer and intellectual, Robert Bandinter, succeeded in getting the death penalty abolished in France when he was fifty-three. Stanislav was thirty-four. His murder has robbed us of all the coming years of his brilliant career as a judicial and social activist, of all those things that he could have done during this time. We no longer have those years to look forward to. We no longer have any time at all. How much time will pass before we see again in the Russian legal system  young trial lawyers and intellectuals capable of beating the system on its own ground with such elegance, of making it less cruel?

With his activism, Stanislav showed that we don’t have to be afraid of taking control of our lives. Today, someone allowed himself to take control of Stanislav’s death. Anastasia Baburova, a young activist and journalist who had been accompanying Stanislav on Prechistenka Street and attempted to stop the murderer, was shot from the same pistol and died in hospital. The chain of crimes against justice in Russia has not been unbroken for the past several months. The murders of Stanislav Markelov and Anastasia Baburova are two more links in this chain. How can we break the chain? What do we have to do to deflect the arms of the hired thugs, who attack us with baseball bats, pistol barrels, and search warrants? What do we have to do to breathe more freely?

On January 20, a memorial will take place at twelve noon at the site of Stanislav and Anastasia’s murders (Prechistenka, 1). Come with flowers, and bring your friends and people who share your views.

On January 20, a memorial march will take place at 7.00 p.m. in Saint Petersburg. Marchers will meet at the Bukvoyed bookstore (Ligovsky Prospect, 10) and march to the Field of Mars. Marchers are asked to bring photographs, candles, and flowers.

Stanislav Markelov  was a lawyer who worked on such cases as the trial of Colonel Yuri Budanov; the Nord-Ost hostage tragedy; neofascist attacks on migrants and anti-fascist activists; the massive police pogrom against the residents of Blagoveshchensk; the murders of journalists; and the first cases filed under Russia’s new terrorism laws. In addition to working with and defending the journalist Anna Politkovskaya and participating in other major cases, he worked for long periods in Chechnya and other major hotspots. He created the Rule of Law Institute, a network organization that offers legal assistance in publicly important cases and fosters public discussion of the legal and social aspects of the work of journalists, law enforcement officials, lawyers, activists, apartment owners, and workers. He participated in a number of intellectual and civic initiatives, including the Russian and international Social Forums. He consulted individuals and organizations on freedom of assembly and combating police abuse, and he also consulted activists of social movements, trade unions, nongovernmental organizations, and civic initiative groups.

Anastasia Baburova was an activist in the anarchist and environmental movements. She participated in many protest actions and civic initiatives, such as the European Social Forum in Malmö (2008). She was a freelance journalist for Novaya Gazeta, where she covered non-mainstream youth movements, street actions, demonstrations, and court cases.

11 responses to “Stanislav Markelov Has Been Murdered”