Babi Badalov: Artist on the Run

Artist on the run
By Sergey Chernov 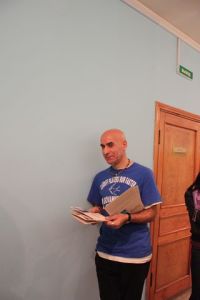 Artist and poet Babi Badalov feels that his life is threatened both in his home country Azerbaijan and in Russia because of his politically conscious art and because he is openly gay. Growing nationalism and increasing attacks on people from the former Soviet republics also means that Russia is not entirely safe for someone from Azerbaijan. Badalov thought he had found a new home in Cardiff, Wales, where he had been based since December 2006, but earlier this year the U.K.’s Home Office denied his application for political asylum.

“[In Britain] I mixed with many people who applied for asylum—Afghans, Iranians, Somalis, people from all over the world. We went to the Refugee Council together, lived at the hotel together. There is such a word used there—‘chance,’” Badalov said during a recent phone interview from Helsinki, Finland.

“You never know what will happen, everybody says it’s all up to ‘chance,’ that it’s a ‘lottery.’ You can have a solid case and still be denied asylum. Some other person can come [to the U.K.] just for the hell of it and receive [asylum].”

Badalov, who was one of the best-known artists in the St. Petersburg independent art scene centered at the Pushkinskaya 10 art squat in the 1990s, recently spent several weeks in the city, en route to Western Europe from Baku, Azerbaijan. While in town, he opened an exhibition of his work called “The Persian Ambassador,” which runs through December 28.

Deported to Azerbaijan from the U.K. on Sept. 20, despite a massive campaign in his defense launched by friends and supporters both in the U.K. and abroad, Badalov had to live covertly in Baku for two days, hiding from brothers who are angered by his homosexuality. His sister had warned him over the phone never to come to the country again.

“It’s not just my relatives. My whole small town is aghast that such a ‘faggot’ comes from our village,” he said.

“I can’t tell you how horrible it is. If I die and there’s a funeral, nobody will come: the mullah won’t come, nobody will read the Koran. [The body of a gay man] is a dirty, foul body. It cannot be touched; it cannot be washed. It must be thrown into a pit, because it’s so shameful. This attitude still exists there.”As a result of the campaign on his behalf, Azerbaijan Airlines declined to take part in deporting Badalov, but BMI (British Midland Airways) agreed. According to No Borders South Wales, a group fighting against migration control and for freedom of movement for all human beings, BMI CEO Nigel Turner wrote in an e-mail, “I do not have the time or resources to investigate each case myself [and] nor do BMI.”

Sending Badalov to Azerbaijan was also a danger to him as he is known for works criticizing the country’s authoritarian rulers.

“Azerbaijan is one of many countries that wants to be a member of the European Parliament. It wants to be an imitation of Europe, like Russia does, but in reality everything is rotting there, worse than it was in the Soviet Union,” he said.

“I tried to exhibit my work called ‘Mister Musor’ [Mr. Garbage] a few times, where I am standing on a heap of garbage in Lenin’s pose.

“When the Azeri President died, they put his monuments everywhere — on every central street, on every central square — giant, hi-tech posters are everywhere, posters of Heydar Aliyev. The main street in every village is named after Heydar Aliyev, while all the rest are rotting. You walk ten meters [away from the main street] and it’s all sores. People live in shit, eat bones, die of hunger. But when [current President Ilham Aliyev] visits, there’s a monument to his father, and everything is fine. Lenin has been resurrected.”

After two days in hiding in Baku, where he slept in an art gallery, Badalov flew to St. Petersburg on a plane ticket bought over the Internet by a friend in London.

Born in 1959 in Lerik, an Azeri village near the Iranian border, Badalov came to Leningrad (St. Petersburg) in 1980, after serving two years in the Soviet Army.

“As we all knew in Soviet times, St. Petersburg was the cultural capital. So, as a person interested in everything that is new, I decided to go to Petersburg, as many did, to be closer to the modern, progressive world,” he said.

“There I met nonconformist artists and went to their gatherings. But it was scary: I worked as a night guard, as a concrete worker; I had a limitnaya propiska (a limited residence permit) and lived in a creepy workers’ hostel.”

But Badalov recalls the early ‘90s in Petersburg with affection.

“When Russia opened up and the Soviet Union broke down, we became interesting,” he said.

“It was a golden time. There was a need for contemporary art. Western artists started to come, and it became easier to hold exhibitions. That is why my works began to sell, and it became much easier for me as an artist; I had money, a studio, contacts.”

“These ‘New Russians’ emerged; it became scary to go out on the street. I got scared and ran from Russia,” said Badalov.

Badalov first moved to Turkey, but could not put down roots there. He then moved back to Azerbaijan, where his life soon became intolerable.

“I was forced to get married and live behind the mask required by my parents and relatives,” he said.

“It was a creepy time. I acted like an actor, always playing some role, controlling myself.”

In 2006, he was invited to do a workshop as part of an international art program for two weeks in Oxford. With a British visa already in hand, he later decided to move to the U.K. for good.

While he is fond of his Russian friends and the Russian language, the country is not mutually welcoming to Badalov. He said he received threats from unknown men in the street, who told him that he should leave.

“I criticized the Russian authorities in some of my poems,” said Badalov, who wrote a poem about Anna Politkovskaya, the Novaya Gazeta journalist and persistent critic of the Kremlin’s politics who was shot to death in Moscow in 2006.

“I read it in Italy; it mentioned Putin and Anna Politkovskaya. I have some other provocative poems, so I am simply afraid to stay in Russia. It’s scary there. Even though I love Russian culture and my best friends live there.

“I was visiting a friend [in Petersburg], and I was horrified when I walked back home. In the West, it is just the opposite; I like to walk at nights there, rather than in the daytime.” 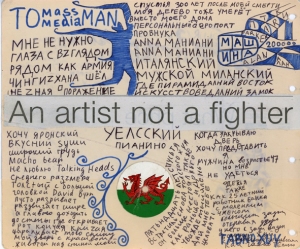 Badalov came up with the idea for the series of collages on display at the “The Persian Ambassador” while struggling for political asylum in Cardiff. That is where he found an old, 21-page album in a charity store. He filled the pages with magazine cutouts, newspaper headlines, his own drawings, and poems written in an odd mixture of languages. The works deliver a strong message about an artist with no home.

“I’ve remained a victim of languages, no language sticks to me. I can’t express myself in any language. When I was born, I spoke a local tribal language, close to Persian. When I went to school, it was Azeri; then it was Russian, now it is English. That is where this paranoia comes from — Cyrillic characters changing into Latin characters, English into Russian. It is a way of showing my emotions; it contains a bit of politics and a bit of philosophy.”

Thomas Campbell, the exhibition’s curator, described Babi as an “iconic figure” for the St. Petersburg alternative art scene for his vision, incredible productivity, and willingness to join other artists’ projects.

“The album pages that we’re showing at the Freud Museum are just a small part of his Cardiff period, which also includes a whole army of dolls that Babi fashioned from junk he found on the street and in thrift shops,” wrote Campbell in an e-mail interview this week.

“The ‘visual poems’ (Babi’s term) in ‘The Persian Ambassador” are also ‘junk art,’ but in this case the junk is the bits of language, discourse, and images that all of us wade through every day, but few of us are capable of transforming into poetry, into art. Babi’s junk art, however, isn’t typical junk art, which I usually find depressing.

“Instead, the collages in the show are incredibly witty, precise analyses of the contemporary moment and Babi’s own predicament, which is also everyone else’s predicament — perpetual homelessness. For Babi, this is also reflected in his constant traveling between and among languages—Azeri, Russian, English, Talish (his ‘mother’ tongue, literally), what-have-you. Again, this stuff could be turned into dull art, but Babi’s skills as an artist and poet, and his unflagging punk energy make it all immediately appealing, fun, and affecting.

“The Museum and Babi found an ideal way of exhibiting the album pages that really involves the viewer. They’re pretty irresistible and engaging.”

One response to “Babi Badalov: Artist on the Run”